Delegates from the 25 member states of the Inter-African Coffee Organization are meeting in Yaoundé in the fourth African Coffee Symposium. During the five-day conclave which opened on 29th November 2016, the delegates will exchange notes and share experiences on how the African coffee industry could emerge.

The symposium is holding under the theme, “Inclusive Value Chain Transformation in the African Coffee Industry”. In Cameroon, coffee is grown extensively with robusta coffee more prevalent in the coastal areas and arabica coffee widespread in the western highlands.

In September 2014, the Government of Cameroon validated and launched a new plan to revive the coffee sector, hoping to boost production and in that same year, Cameroon was ranked the 31st largest producer of coffee in the world. It is worth mentioning that coffee farming in Cameroon dates to 1884, during the German colonial era.

Prime Minister Philemon Yang will not be meeting with the Anglophone leaders today Wednesday November the 30th 2016. The Head of Government will represent President Biya at the Extraordinary Summit of the Economic Community of Central African States (CEEAC), which opens today in Libreville, Gabon.

Philemon Yang reportedly promised the new generation of Anglophone leaders that he was going to meet with them for a second round of dialogue today. But his political boss who has no feeling for the Anglophone community has decided to dispatch the Prime Minister to Gabon.

According to Alain-Claude Bilie-Bi Nzé, Gabonese Minister of Communication and government spokesperson, the Libreville summit will be devoted to peace and security in the sub-region. Specifically, at the summit in the Gabonese capital, the Heads of State, Government and delegations present will examine the situation of the Central African Republic, Cameroon and Chad. Important resolutions are therefore expected.

By Fru James in Yaounde

A Labour lawmaker in the United Kingdom has revealed that the Members of Parliament sexually harass young employees but can go unpunished as their victims feel helpless. Labor MP John Mann made the remarks at the House of Commons’ Standards Committee on Tuesday, saying that sexual assault by politicians at Westminster was a “major issue” to be addressed. “In here [Westminster], there are alleged sexual assaults by current members of Parliament and nowhere for people to go, or they don’t feel confident in going. That’s a major issue,” he said.

Mann called for the necessity of setting up a whistle-blowing service to help victims come forward, adding that the female employees did not feel secure to raise the issue. The lawmaker told the committee that he was aware of cases where staff had “significant issues” with the way current parliamentarians behave towards them but he was powerless to report colleagues to police because “there is no criminality” involved.

“That is not a matter of criminality but [one] that would be potentially an issue for whistle-blowing to make a complaint. The cases I am aware of, there is no criminality otherwise it would be very straightforward. I would be advising go to the police,” he said. In a shocking example, Mann said that older MPs would force young female interns to work late before “pressing” them into going home with them.

“There has been improper sexual behavior in this building that I am aware of with members of staff by Members of Parliament, including in recent times, the last two years, and I have had complaints of that, the individuals do not feel comfortable or confident, working in a political environment, of raising that issue and explicitly did not want me to raise the issue and therefore potentially have them named,” Mann noted.

UK MPs are already embroiled in other sexual scandals. In 2015 alone, reports by UK media reveled that over 247,000 attempts were made by users of the British parliament’s network to check out pornographic material.

Senators and members of parliament of the Social Democratic Front, SDF have staged a protest march in Bamenda. The elected representatives say the riots of Bamenda and the other street demonstrations are the direct consequence of bad governance by the ruling CPDM crime syndicate.

The SDF MPs reportedly left the National Assembly Chamber on the 28th of November which is currently examining the budget and braved the bad roads to Bamenda, the capital of the North West Region and called for the holding of a national conference.

These elected representatives of the people carried placards condemning police violence on lawyers and the students with others stating that “Federalism remains the only solution”.  Hon. Tchinda Fobi, of the Bamenda constituency was quoted as saying that the Anglophone problem is real in Cameroon and that there was an urgent need for national dialogue.

On November 27-29, 2016, the SDF Senators and MPs told Marcel Niat Njifenji, President of the Senate, and Cavaye Yéguié Djibril, President of the National Assembly, to “apprehend the major grievances of the Anglophone people”.

2016 Women’s AFCON: Cameroon through to the final 0

A goal from Raïssa Feudjio at the 71st minute was enough to take the Indomitable Lionesses to the finals of the Women’s Africa Cup of Nations 2016. The girls struggled to develop their game in an encounter that had a shy start. Aboudi Onguené was exceptional but failed to find our taliswoman, Enganamouit in the axis.

Samira Suleman of Ghana wanted to cut short Cameroon’s glory but goalkeeper Ngo Ndom made a spectacular save.  Head Coach Enow Ngachu was tensed as the game progressed.

The decisive moment came at the 71st minute with a miss from the Ghanaian goalkeeper following a corner from Aboudi Onguené.  Enganamouit made a failed attempt to convert, but the confusion benefited Feudjio who scored the only goal of the match. Cameroon qualified for the final of the women’s AFCON and will face the winner of the match Nigeria-South Africa.

UN chief Ban Ki-moon has denounced recent bloodshed in the Central African Republic (CAR) where clashes between members of the former Seleka rebellion killed scores of people. The clashes between rival armed groups from ex-Seleka in Bria northeast of the capital Bangui killed 85 people and displaced nearly 11,000 people, according to the UN.

In a statement on Monday, the UN chief urged the armed groups to “immediately stop the violence and genuinely commit to ongoing efforts to address the root causes of the conflict.” The fighting was said to have broken out between the Popular Front for the Renaissance of the Central African Republic (FPRC) and the Union for Peace in Central Africa (UPC). The two factions have been engaged in sporadic fighting over control of taxes levied on nomadic Fulani herdsman during the current seasonal migration. In March 2013, the Central African Republic plunged into chaos when then-president Francois Bozize was toppled and replaced by Michel Am-Nondokro Djotodia, the first Muslim to hold the presidency in the country.

Djotodia’s opponents then formed “anti-Balaka” vigilante units, drawn from the Christian majority, which began to target Muslims and commit widespread atrocities. The UN Mission in the Central African Republic (MINUSCA) and the national police are seen conducting a joint operation in the capital Bangui. (Photo by UN) In 2014, some 11,000 peacekeepers were deployed by the UN to the country as part of MINUSCA or the Multidimensional Integrated Stabilization Mission in the Central African Republic. Seleka and anti-Balaka representatives signed a ceasefire agreement later that year but the country has not yet fully emerged from its bloody past.

The UN’s humanitarian coordinator for Central African Republic, Fabrizio Hochschild, said in a statement on Monday that almost half of the country’s population of over four million people is in dire need of humanitarian aid. According to the UN Office for the Coordination of Humanitarian Affairs (OCHA), hundreds of people have been killed and many more displaced since a deadly series of clashes broke out in the country in September.

× We have 2 sea ports all in francophone areas

× We have 3 international airports.  All in francophone areas

× We have 2 or 3 hydro electricity dams. All in francophone localities

× Economic and political capitals all francophone

× the 3 first most powerful position in Cameroon Head of State, Senate President, National Assembly Speaker) all occupied by francophones

× The greatest document in public service (integration decision) only in French.

× Ministers of Public Service, Finance, Justice and Defense are Francophones.

× Government has not done any investment in any Anglophone zone to favor Anglophones. 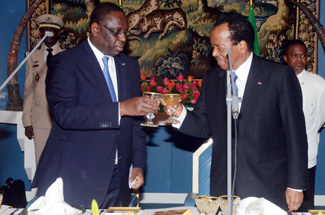 2016 female AFCON: Decision day for the Indomitable Lionesses and the Black Queens of Ghana 0

The Indomitable Lionesses of Cameroon will face the Black Queens of Ghana today the 29th November 2016 in the semi-final of the 2016 Women Africa Cup of Nations. The match will be staged at the Amadou Ahidjo stadium at 4pm Cameroon time. This will be the seventh appearance of the Black Queens at the Women AFCON semi-finals. Out of their last six appearances at the semis, the Black Queens have ended three times as runners-up (1998, 2002, and 2006) and three times in the third position (1995, 2000, and 2004).

After missing out of the semis in the last four AFCON editions, the Black Queens of Ghana will be looking forward to making something out of the semis. For her part, the Indomitable Lionesses of Cameroon will be making their tenth appearance in the Women AFCON semis. Out of their 10 appearances at the semis, they have been runners-up three times (1991, 2004, 2014), ended twice in the third Position (2002, 2012) and also four times in the fourth Position (1998, 2006, 2008, 2010).

Playing at home, the Lionesses will be looking forward to lifting the trophy for the first time. Since 1998, Cameroon and Ghana have met in the Women AFCON seven times. Out of the seven times, the Lionesses have recorded two victories and the Black Queens registered five. Worth noting is the fact that, five of these meetings have been at the group stage (1998, 2000, 2006, 2010 2014). Meanwhile, the games between the two at the semis were a difficult battle as goals came only at extra time.

The first time they met was on 17 December 2002 when Ghana beat Cameroon 3-2 after extra time. On 28th September 2004, Ghana throw weights with Cameroon and this time, Ghana lost to Cameroon 0-1 after extra time. In another semifinals duel, reigning champions, the Super Falcons of Nigeria will take on the Banyana Banyana of South Africa on Wednesday 30th November at the Limbe Omnisport Stadium.