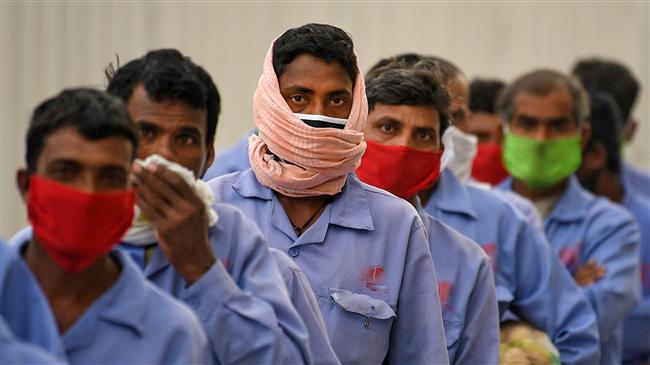 Arab countries in the Persian Gulf region have locked down over-crowded labor camps and areas with large populations of low-wage workers in an attempt to curb the spread of the new coronavirus, leaving migrant workers stranded and jobless.

The over-crowded labor camps in the region, often unsanitary and populated with mostly Asian workers, are believed to be hotspots of the new coronavirus.

In the United Arab Emirates (UAE), charity groups are looking for empty buildings to separate migrant workers, while Bahrain is repurposing closed schools to relocate low-income laborers from other overcrowded accommodation.

The deadly virus has also spread in densely-populated commercial districts where many expatriates share housing to save on rent.

“Many people are infected and are staying with other people,” Krishna Kumar, the president of the UAE-based Kerala Social Center, said on Wednesday. “We are trying to isolate them.”

Despite measures being taken to contain the spread of coronavirus, such as suspending passenger flights, closing most public venues, and imposing curfews, the number of coronavirus cases in the Arab states has been rising.

Doctors in the UAE, who spoke with Reuters on the condition of anonymity, said overcrowding is one of the biggest factors for the surge in cases.

Several Persian Gulf Arab states have allowed outbound flights for foreign workers who have lost jobs or been put on leave, but some of the home countries say they are not prepared to take them back.

On Sunday, the UAE threatened to review labor ties with countries that refuse to allow workers who have lost their jobs to be repatriated. The UAE said it would limit quotas for work visas issued to the citizens of those countries.

The new coronavirus, which causes a respiratory disease known as COVID-19, emerged in the city of Wuhan in December last year, incrementally affecting the rest of the world.

The virus has so far infected 2,000,065 people worldwide, and over 126,754 have died, according to a running count by worldometers.info.

The UAE, which has the second largest number of coronavirus cases after Saudi Arabia in the Persian Gulf, has so far recorded more than 4,933 confirmed cases and 28 deaths.