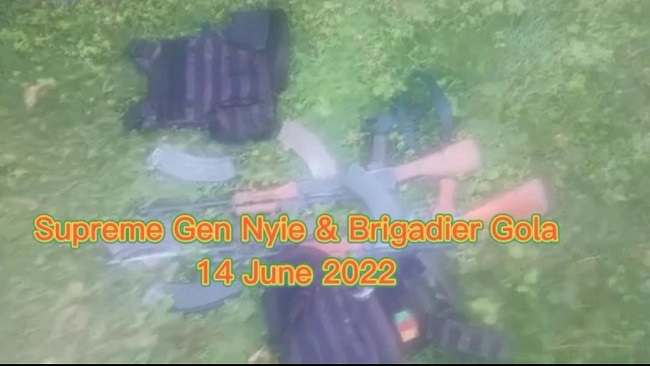 Two members of the Cameroon government Francophone dominated military have been killed in an armed attack by Ambazonia Restoration Forces in Njinikom, Boyo constituency.

According to government cables, the incident took place on Tuesday, when the pro Yaoundé army soldiers were on a patrol in Njinikom.

Yaoundé is yet to identify the soldiers but a video made public by Southern Cameroon Self Defense Forces in Boyo detailed the attack and the military equipments gained by the Amba fighters.

Cameroon Concord News gathered that four bullets hit both of the soldiers in the head and six bullets hit their hands.

The Southern Cameroons Interim Government has not commented on the happenings in Boya. However, an aide to Vice President Dabney Yerima has been quoted as saying the Francophone soldiers were in Njinikom to commit inhuman crimes.

Southern Cameroons has been a victim of French Cameroun military attacks for over five years now.

After decades of chafing at perceived discrimination and marginalization, the people of Southern Cameroons led by their leader President Sisiku Ayuk Tabe declared the independence of the Federal Republic of Ambazonia in 2017, triggering a crackdown by the French backed Francophone authorities in Yaoundé.

The spiral of fighting has claimed more than 10,000 lives and prompted more than a million people to flee their homes, according to the International Crisis Group (ICG) think tank.

Amba fighters are now targeting police, soldiers, officials and schools, which they deem to be symbols of the French Cameroun state.

The Francophone armed forces have also been accused of abuses — charges that the Cameroonian authorities have in the past been quick to dismiss.