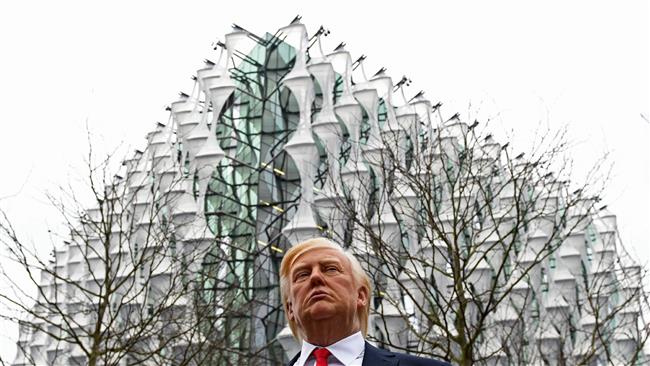 Trump absent for new US embassy opening in London 0

The new US embassy in London has opened its doors to the public for the first time but President Donald Trump failed to attend its inauguration.

Last week, Trump refused to attend the inauguration over fears he will be greeted with mass protests in the British capital where most of the citizens dislike him due to his divisive polices. He also denounced the new embassy as too expensive and poorly located.

Embassy staff streamed past heavily-armed police as the new building opened for business on Tuesday.

US Secretary of State Rex Tillerson was reportedly scheduled to open the embassy instead of Trump but he also did not attend the inauguration.

In a tweet, Trump criticized former US President Barack Obama for selling the previous embassy to a Qatari government investment fund which is planning to turn it into a luxury hotel, and building a new one.

“I am not a big fan of the Obama administration having sold perhaps the best located and finest embassy in London for ‘peanuts’, only to build a new one in an off location for 1.2 billion dollars,” Trump wrote last week.

“Bad deal. Wanted me to cut ribbon – NO!” The decision to build and relocate the US embassy in London was made during the administration of former US President George W. Bush.

Trump’s plans to visit Britain have met resistance from some politicians and activists who disagree with his policies such as his actions on immigration and climate change.

London Mayor Sadiq Khan, who Trump has repeatedly criticized, had earlier tweeted that he was happy when Trump called off the proposed visit, saying the US president was not welcome in the city and “he’s finally got that message.”

Trump was expected to make his first trip to the UK since entering the White House and had originally been scheduled for a full State Visit including a Royal banquet at Buckingham Palace but this was later downgraded to a “stripped-down” trip that did not involve getting the full “red-carpet” treatment from the Queen.

More than a million people in Britain signed a petition last year calling for the state visit by the US president to be cancelled.