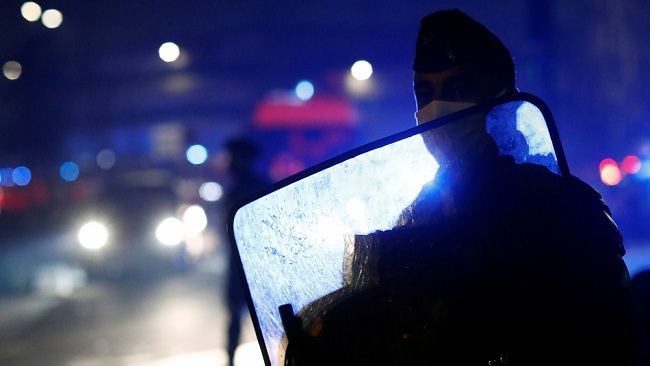 Four French police officers caught on camera while brutally beating a black man in Paris earlier this month have been charged, amid public outrage over France’s new controversial security law.

A video footage circulating online became headline news on French television channels on Saturday, which showed the violent arrest of a black man, who was not wearing a face mask — required under coronavirus restrictions.

Three police officers followed the man, identified as music producer Michel Zecler, inside his music studio in Paris and began repeatedly punching him and beating him with a truncheon. They also subjected Zecler to racial abuse.

The officers later left the studio and threw a tear gas grenade into the building to force those inside to come out.

Nine other people, according to reports, who were recording music in the studio basement were also beaten.

The police were unaware they were being filmed by a surveillance camera.

Zecler told reporters that the officers also hurled repeated racist insults at him, and he was taken into custody for 48 hours.

“I was lucky enough, unlike many other people, to have had the video that protects me,” he said

Authorities said Monday that four officers have been suspended in connection with the incident.

The examining magistrate charged three with “willful violence by a person holding public authority” and “forgery.”

The other officer suspected of having thrown a tear gas grenade into the basement was charged with “willful violence.”

According to a French judicial source, two of the officers were being kept in custody, while the other two were put on conditional release.

The prosecution had requested pre-trial detention for the first three, and a judicial review for the fourth.

President Emmanuel Macron described the violent incident as an “unacceptable attack” and asked the government to come up with proposals to “fight against discrimination.”

“France must never allow hate or racism to spread,” he said on Friday.