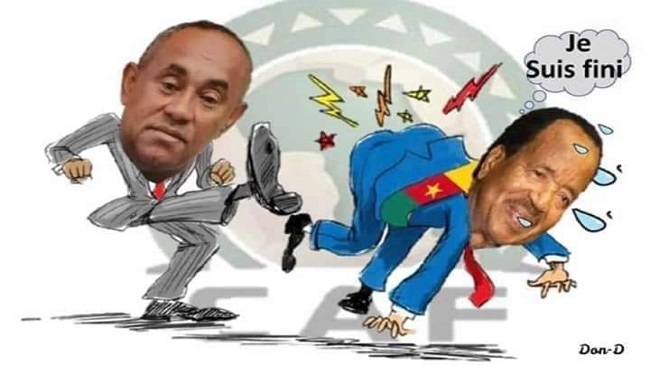 AFCON 2019 Security Issue: Another Own Goal By CAF 0

Egypt and South Africa are the only countries that met Confederation of African Football’s December 14, 2018 deadline to show interest in hosting the African Cup of Nations (AFCON) in 2019. The decision on who wins the hosting rights is expected to come up on January 9, 2019. This is going to be barely six months to the event in June. The decision to host arose when Cameroon was stripped of the hosting rights after it was originally awarded in 2014. CAF had claimed that Cameroon’s unpreparedness and the insecurity arising from the Boko haram insurgency and the Anglophone separatists group were reasons it denied the country from hosting AFCON 2019. I think CAF’s decision is unfair.

Taking the contentious issue of security for instance, what measure of insecurity is enough to withdraw the hosting rights from a candidate that had been awarded and how close to the tournament can this decision be made? Bigger events like the Summer Olympics in Munich 1972 and Atlanta 1996 are remembered for massacres of Jews and bomb blast during the respective games, yet they weren’t considered unsafe to host future events. Even AFCON 2010 staged in Angola witnessed a terrorist attack on the Togo national team bus while on its way to the competition by a Cabinda separatist group similar to the Bamenda separatist group in Cameroon. Then, Togo pulled out against CAF’s insistence. If CAF could demand Togo to partake in an event that they feared for their lives and encouraged other nations to stay behind, why use insecurity as an excuse to strip Cameroon of the event?

However, which African nation is safe? Nigeria, Chad, Niger and Cameroon are battling Boko Haram insurgents. Libya remains without a central government after Gaddafi. Kenya and Somalia are battling Al-Shabaab. West Africa is battling ISIS. Central African Republic is still on fire. The Congo wars have never really ceased. The same goes to Rwanda, Burundi and Uganda. Separatist groups abound in Angola, Cameroon, Morocco and South Sudan just to mention a few. Elections spark violence in African nations, so triggering the insecurity clause will mean AFCONs will be taking place outside the continent. I didn’t even mention Ebola. In fact, sports governing bodies often refuse to move tournaments from previously rostered venues over security or political issues to make a statement that sport is a unifying tool that transcends unhealthy differences.

Enter Cameroon’s unpreparedness. When Cameroon was granted AFCON 2019, the event was a 16-team event to be played in the traditional months of January-February. All of a sudden CAF’s new leadership felt that Africa’s football showpiece be expanded to 24 teams and moved to June-July to align with the European football offseason. Nothing is wrong with expanding AFCON, but why the immediacy considering that qualifiers had already begun for a 16-team event? That is akin to changing the rules of the match in the middle of the match. This same argument and suspicion goes to FIFA’s plan of expanding the 2022 World Cup to 48 after awarding Qatar on a 32-team platform. So Cameroon is now made to change plans. More matches, more hotels, more stadia, more ground workers and they will now have to consider the rains. Yes, the rains.

Because Europe is increasingly becoming the hub of football, more and more tier one players gravitate there to ply their trade. This means that for AFCON to showcase its finest, participating nations have to call up Europe-based professionals. For this reason, there is usually an exodus of African players during the midseason to participate in AFCON. This irritates European club sides because they are made to do without their best legs during the weeks of the competition and worse if the players return with injuries. This has made CAF tinker with the scheduling of AFCON over time. Older ones can recall it used to be in March-April before it stabilised at January-February which I believe is the best compromise. Besides being in the African dry season, it also corresponds with when most European leagues take a brief winter break.

However, these European football oligarchs have cornered CAF into an unforced foul of moving AFCON to the European summer. Did CAF consider that AFCON will now have to muscle TV time with the oldest international football competition Copa America (South America’s Nations’ Cup)? Did they also ponder that the June-July date clashes with FIFA Confederations Cup, a competition for continental champions? Does it mean the African champions would have just few weeks or days to prepare for that event? With preseason friendlies becoming progressively essential and the expanding International Champions Cup, the problem of clubs releasing players for AFCON will not go away just like that. African players will be doing all to secure their shirts and transfers will be on at that time.

June-July is the peak of the rainy season in sub-Saharan Africa. Compelling prospecting AFCON hosts to build roofed arenas to avoid shifting matches due to rains is practically impossible for African countries. Besides, football festivals like AFCON are not narrowed to the field of play. There are several other out-of-field events and drizzles will dampen the excitement of the event. Except CAF is saying AFCONs will only be hosted in North Africa and Southern Africa which is apartheid.

Boca Juniors and River Plate just played the finals of Copa Libertadores (South America’s Champions league) in November while Son Heung-min will be leaving Tottenham Hotspur for three weeks in January like other Asian footballers to captain South Korea in the 2019 Asian Cup. So what is the big deal about aligning with the European calendar? What is most important is that there is orderliness in schedules. Actually, the angst expressed by European clubs when there is a flight of African players in January publicizes AFCON.

Asking Cameroon to now host the 2021 edition does not break the ice on the farrago of chaos created. Will Cote d’Ivoire that was initially handed 2021 and Guinea 2023 now prepare for 2023 and 2025? Shouldn’t Egypt or South Africa be given right of first refusal after losing the 2019 bid?

Aligning with European football calendar is not what Africa needs, it is aligning with European football character. Africa can’t continue to run football with a national team bias, it is club football that is the soul of the game. Creating parallel AFCON for home-based players or the obsolete staging of the event every other year has only left African football behind. A quadrennial AFCON like other continents in my opinion will be a better deal. This will not only give prospective hosts more time to prepare but also reduce the number of low-ranked teams that drop out in the middle of the qualifiers. Also the duplicated African Nations Championship (biennial nations’ cup for home-based players) should be dropped so that CAF and its affiliates can invest in local leagues which are the tributaries that supply national teams. This way the best of Africa will be in the continent and would not continue to be tossed to and fro by Europe.