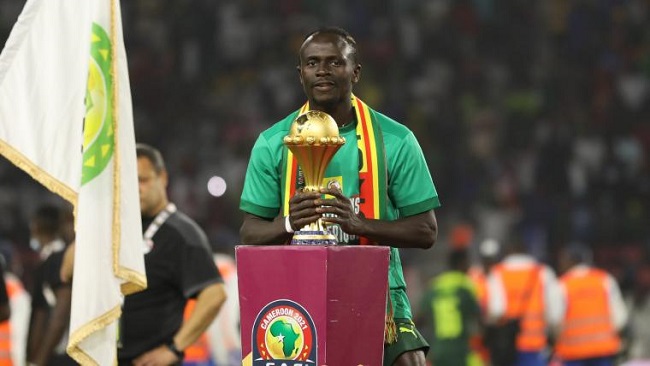 Mayor of the Senegalese region of Sedhiou, Abdoulaye Diop, has confirmed plans to name the city’s new stadium after Liverpool star Sadio Mané as a reward for his performances at the 2021 Africa Cup of Nations.

The 29-year-old scored the winning spot-kick that helped Senegal beat Egypt 4-2 in the penalty shoot-out after a goalless draw at the end of extra-time, and it sealed the country’s first Afcon title.

Mane played in all of the Teranga Lions’ games in Cameroon and he contributed three goals with two assists.

The Afcon success capped Mané’s achievements as an indigene of Sedhiou, a region in the South-West part of Senegal, having also won major titles at Liverpool which include the Fifa Club World Cup, Uefa Super Cup, Uefa Champions League and the Premier League.

“Sadio Mané has honoured all of Senegal, the Sedhiou region and the entire Casamance area,” Diop said, per Sports News Africa. “I have decided to name the Sedhiou stadium after him.

“In doing so I wish to convey the gratitude of all the sons and daughters of the region towards him.

“He has made all of mankind aware of Bambali and Sedhiou, the region’s main town. This is a gift that Sadio Mané truly deserves.”

Following their triumphant arrival from Cameroon, Aliou Cisse’s men were hosted in a classy reception by Senegal President Macky Sall in the Presidential Palace on Tuesday.

President Sall conferred the country’s highest order upon each player which makes them Grand Officers of the National Order of the Lion.

In addition to the honour, each of the players and members of the coaching crew received a bonus of 50 million franc CFA (AUD$121,860) and a 200 square metre plot of land in the nation’s capital, Dakar.