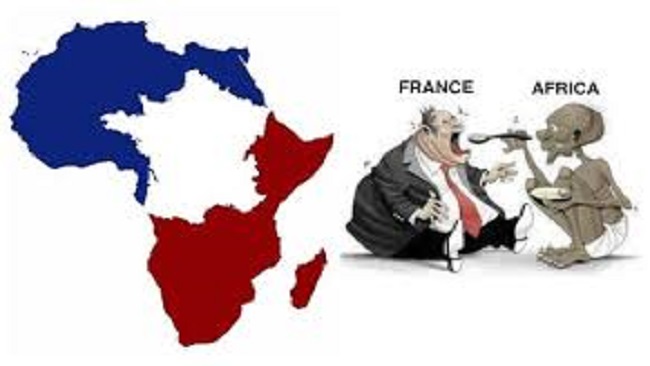 This economic slavery is important for the development of the French economy. Whenever this traffic is likely to fail, France is ready for anything to reconquer it. If a leader of the CFA zone no longer meets the requirements of France, Paris is blocking its foreign exchange reserves and more, France closes the banks in this country considered “rebel”. This was the case of Côte d’Ivoire with Laurent Gbagbo.

A German newspaper accuses France of looting 440 billion euros each year to Africans through the CFA Franc. “The French government collects from its former colonies each year 440 billion euros of taxes. France relies on the revenues coming from Africa, not to sink into economic insignificance, warns the former president Jacques Chirac.

In the 1950s and 60s, France decided the French colonies of Africa to become independent. Although the Paris government accepted formal declarations of independence, it called on African countries to sign a so-called “pact for the continuation of colonization.” They agreed to introduce the French colonial currency FCFA (“Franc for the French colonies in Africa”), to maintain the French schools and military system, and to establish French as an official language.

The CFA franc is the denomination of the common currency of 14 African countries members of the Franc zone. This currency, which constitutes a brake on the emergence of these countries, was created in 1945, when France ratified the Bretton Woods agreements and proceeded to implement its first declaration of parity to the International Monetary Fund (IMF) . This was called “Franc of the French Colonies of Africa”.

Under this law, 14 African countries are still obliged to store about 85 per cent of their foreign exchange reserves at the Banque de France in Paris. They are under the direct control of the French Treasury. The countries concerned do not have access to this part of their reserves. As the 15 per cent of reserves are insufficient for their needs, they must borrow additional funds from the French Treasury at market prices. Since 1961, Paris controls all foreign exchange reserves in Benin, Burkina Faso, Guinea-Bissau, Côte d’Ivoire, Mali, Niger, Senegal, Togo, Cameroon, Central African Republic, Chad, Congo, Equatorial Guinea and Gabon.

In addition, these countries must each year transfer their “colonial debt” for infrastructure built in France to Paris as Silicon Africa 3 reported in detail. France takes around 440 billion euros a year. The government in Paris also has a right of first refusal on all newly discovered natural resources in African countries. Finally, French companies must have priority in awarding contracts in former colonies. As a result, there is the most assets in the fields of supply, finance, transport, energy and agriculture in the hands of French companies.

The ruling elite in each African country must fulfill these compulsory claims without any other choice. African leaders who refuse are threatened with assassination or overthrow of their government. Over the past 50 years, there have been 67 coups d’état in 26 African countries. 16 of these 26 countries were former colonies of France.

An example is the first president of Togo West Africa, Sylvanus Olympio, overthrown by a coup. He had refused to sign the “Pact for the Continuation of Settlement”. But France insisted that Togo pay the compensation for the infrastructures that had been built by the French during the colonial period. The sum is equivalent to about 40 per cent of households in Togo in 1963, requiring the fairly independent country to reach its economic limits quickly.

In addition, the new president of Togo decided to remove and print his own national currency, the French colonial currency FCFA. Three days after this decision, the new government was overthrown by a group of former foreign legionaries and the President killed. The head of the Legionaries, Gnassingbe Eyadema, received 550 euros from the French embassy for the attack, according to the British Telegraph. Four years later Eyadema was promoted with the support of Paris, the new president of Togo. He established a tyrannical dictatorship in this West African country and remained in power until his death in 2005.

In the following years, the Paris government kept the link with the former legionaries to overthrow unpopular governments in its former colonies. This was the case of the first president of the Central African Republic, David Dacko, overthrown by former members of the Foreign Legion in 1966.