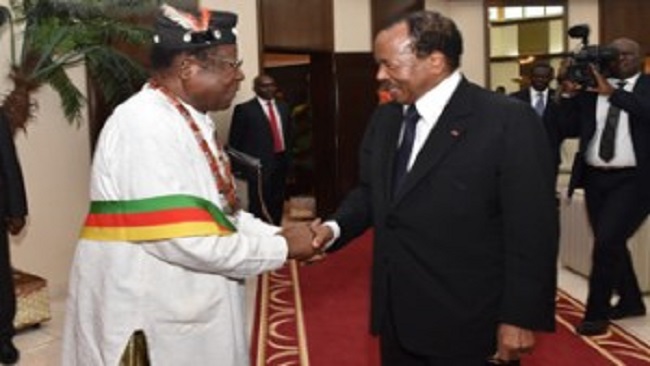 The supreme leader of the Bafaws in the Meme constituency in Southern Cameroons has openly criticized President Biya over his poor handling of the crisis in Southern Cameroons. NFon Victor Mukete, the oldest member of the so-called Upper House of assembly and a long standing father of the reunification of French and British Southern Cameroons said in an interview in the French capital, Paris that the Biya regime has failed woefully in its management of the Anglophone crisis.

Chief Mukete who will be a 100 years old this 2018, told the French media that Biya is “inaccessible”. He acknowledged that Southern Cameroonians were being marginalized and observed that Anglophones have barely 10 ministers out of 60 in the government. The patriarch of Southern Cameroons reunification politics further pointed out that the creation of the commission for the promotion of bilingualism and multiculturalism was too little too late.

The paramount leader dismissed the politics of a one and indivisible Cameroon stating that only a ten state federal structure can solve the current Anglophone crisis that has shaken the country for more than a year. Chief Mukete’s influence goes beyond the Southern Cameroons minority as he is a member of the Senate, the Economic and Social Council, the Chamber of Commerce and Chairman of the Board of Camtel.