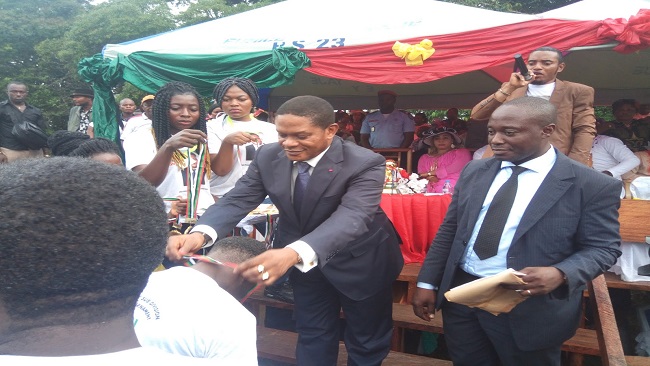 Sons and daughters of Manyu, you might have heard an announcement on CRTV and your local radio stations about
a Manyu Solidarity Initiative in Mamfe on Saturday, January 20th, 2018 launched by Victor Mengot and other
Manyu CPDM sell outs serving in the Gangster regime of Paul Biya. We are strongly outraged, and believe those who have lost their loved ones should feel more outraged.

Here are some questions that should really outrage you:

Where was Victor Mengot and his Solidarity Initiative towards the sons and daughters of Manyu when Paul Biya sent his soldiers to kill our people?

Where was Victor Mengot and his hypocritical love towards the peoples of Kembong, Agborkem, Akwaya, Kajifu and
Eyumojock when the Soldiers of Paul Biya killed and forced them go on exile to Nigeria?
Was Victor Mengot ignorant about the evil plans to kill Manyu people? Why didn’t Victor Mengot warn his Manyu People or even tell Paul Biya to leave Manyu alone?

We have not forgotten the Press Release put out by the SDO of Manyu warning our people to flee from their villages
or be killed.

We have not forgotten how the Governor of the South West Region tricked our Manyu people by sending another
Press Release telling our people not to run into hiding.

We have not forgotten that the assurances from the criminal Governor proved to be a death sentence for our people
who did not run away. Those who stayed were brutally killed by the soldiers of Paul Biya.

Now that they do not see more of our people to kill for their blood rituals, Paul Biya has sent Victor Mengot to come
and deceive our people who escaped to return home, just as the Governor deceived those who ended up dead. Victor
Mengot is preparing the ground to get our people killed, so that the living witnesses of the evil carried out by Paul
Biya through the corrupt silence of people like Victor Mengot and other Manyu CPDM conspirators can be hidden
forever.

Therefore, we write to warn you not to fall for this trap. Victor Mengot and his CPDM friends are snakes. The blood
of our Manyu sons and daughters rest on the heads of Mengot and his CPDM DEVILS who turned their backs on
Manyu while Paul Biya slaughtered them.

We call on our brave brothers and sisters who are still around Mamfe to do everything within your power to Disrupt
and Boycott the holding of any such event in Mamfe on the 20th of January.

This bunch of murderers and blood suckers do not speak or represent the People of Manyu. Victor Mengot and the
corrupt Manyu CPDM gang do not own Manyu. The young people whose petrol was destroyed by the Mengot/ Biya
soldiers are the real heroes of Manyu. Their lives cannot be destroyed for the likes of the Mengots and Tabetandos to
reap political gains.