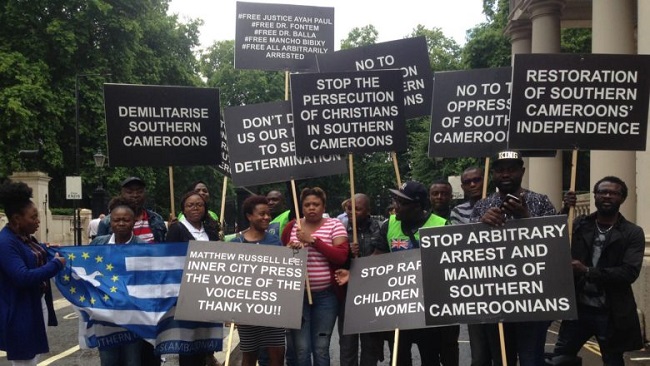 Thousands of people affected by the separatist war that has killed at least 2,000 people in Cameroon’s English-speaking regions have been on the streets calling on the government to be sincere about the dialogue for peace that is to begin September 30, so they can go back to their homes. A thousand people have been in front of public buildings for three days.

Most of the 3,000 victims whom the government says have been in front of public buildings within the past four days have either lost loved ones or seen their property torched. Others who were wounded in the war say they have not had access to health care.

vegetable retailer Petra Bannin, 27,  who fled from the north western village of Nkar, said her business was ruined after her husband was killed and her two sons abducted several times by separatist fighters.

“I am a debtor in Bamenda and I do not know where to get money. I paid a ransom and they are still threatening to take my son. My son can not go back to school, so I am praying that our president Paul Biya should make a way to solve this problem,” she said.

Esther Njomo, coordinator of the Northwest, Southwest Women Task Force For Peace, said they are asking Biya to release arrested English speaking leaders as a sign he is serious about the dialogue.

“We the women are saying that he [Biya] can grant clemency or pardon to those arrested within the context of the Anglophone crisis and allow them to take part in the national dialogue so that we all as one forge ahead looking into the possible solutions for life to go back to normalcy in the two regions,” she said.

Njomo was referring to separatist leader Ayuk Tabe Julius and 10 of his collaborators who were given life jail sentences by a military tribunal in Yaounde that said it had found them guilty of charges including secession and terrorism.

When Biya called for the dialogue, he said he would allow justice to take its course concerning the arrested leaders, but that U.S.- and Europe-based separatist leaders were invited to take part. They turned down the invitation unless the dialogue is held outside Cameroon with non-Cameroonians as mediators because they are wanted for the same crimes for which their peers in Cameroon were given life sentences.

George Ewane, spokesperson of the national dialogue, said people should be assured the government is sincere about the dialogue and will do everything it can for peace to return.

“The major national dialogue will address squarely the reconstruction of affected areas, the return to civil life and the reintegration of ex demobilized combatants. Every conscious and peace loving Cameroonian who wants children to go back to school, who hates bloodshed, maiming, kidnapping, rape must do everything to see us back again with love and fraternity,” he said.

The U.N. office for the coordination of humanitarian affairs reports that the separatist war has forced more than 530,000 people to flee their homes since the conflict erupted in late 2017.