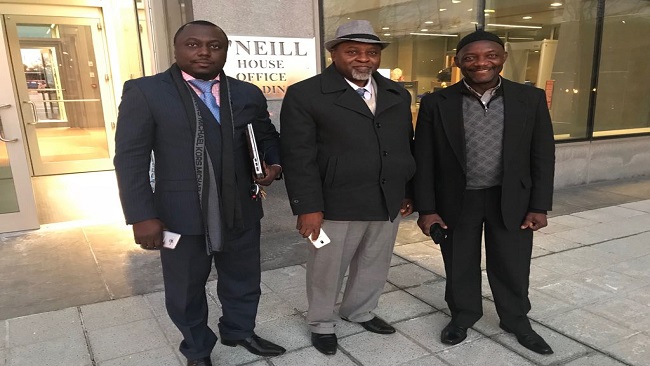 Ambazonia: Secretary of State for Finance meets US officials 0

Ambazonia’s Secretary of State for Finance & Economy Hon. Brado Etchu Tabenyang has held a very intensive and productive discussion with senior officials in the US House of Representatives.  Mr. Tabenyang told Cameroon Concord News that his meeting with the US elected representatives was prompted by events in Abuja, Nigeria and the genocide currently going in the Federal Republic of Ambazonia.

Kimberly Stanton, Russell Hemenway and Senior Democratic Fellow Tom Lantos who is also a member of the Human Rights Commission in the U.S. House of Representatives and Committee on Foreign Affairs were given a briefing with images from Kembong, Dadi, Mbonge, Egbekaw and Kwa Kwa.

The Secretary of State for Finance and Economy described the meeting as “Very exciting” and revealed that the Commission also has credible reporting on the happenings in Ambazonia from Amnesty International and is actively gathering evidence of atrocities and human rights violations in Southern Cameroons.

Some of the gruesome images they have seen were very worrying. The senior US officials hinted that the atrocities of the Francophone dominated army will be submitted to Congress after recess. The Interim Government made a passionate appeal to the commission to act immediately and stop the complete annihilation of Ambazonians from the brutality of the French Cameroun army.