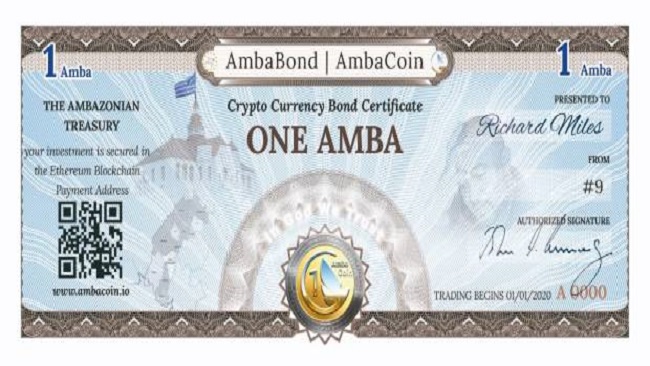 Ambazonians have created their own cryptocurrency 0

Increasingly determined and bold separatists seeking the international recognition of the self-proclaimed “Federal Republic of Ambazonia” (Southern Cameroons) have created a crypto-currency which they claim is the first to be fully nation-backed.

Known as AmbaCoin, 20,082 of the Ambazonian crypto bond had already been bought, out of 100,000,000 on pre-sale as of Nov. 10. One AmbaCoin sells for 25 cents (circa 140 CFA franc) and the main initial coin offering of the crypto-currency is scheduled for Dec. 24. It is said to be backed by the “rich natural resources” of the breakaway region.

The AmbaCoin was conceived and built by a group of anonymous Anglophone separatist scholars, technocrats and developers. But it has gained the support of frontline secessionists and separatist movements. When news of the crypto-currency was made public last month, Chris Anu, who has the title secretary of state for communications & IT for the “Federal Republic of Ambazonia”, posted a sample of the crypto-currency bond on his Facebook page and said: “We are getting there folks.”

In the last five decades in Africa, especially in areas where people want to create a country of their own out of another, people have been opting to put their faith in a form of exchange other than a currency which is globally accepted. During the Nigerian civil war (1966-1970), the then self-declared Republic of Biafra adopted the Biafran pound as legal tender, abandoning the Nigerian pound it had been using before ‘independence’.

There is also a plethora of unrecognized countries in the past which came up with currencies in their efforts to be independent. The Katangas in DR Congo came up with their own franc currency in the 1960s, while the Rhodesian pound was the currency of Southern Rhodesia (now Zimbabwe) from 1964 to 1970.

A statement on the website of AmbaCoin indicates that plans are already underway for the creation of a traditional fiat currency for “Ambazonia” that will be used to peg the future price of AmbaCoin. The English-speaking separatists will be keen to dissociate themselves from the Central African franc (CFA) which Cameroon uses. Both the Central and West African CFA are linked to France’s national treasury.

There’s also the practical advantage that using a cryptocurrency for now will be out of reach of the Cameroon government.

According to the developers, the biggest challenge faced by the breakaway region is that most of the resources and wealth in the area are controlled by the Francophone-led government of Cameroon, which stifles access to its assets.

“Numerous Ambazonians in the diaspora and other stakeholders who want to see a prosperous Ambazonia, are unable to help provide foreign direct investment to the Governing Council,” Amba Coin developers said. As such, they thought the best way out will be to create a bond, which will be used to raise capital to kick-start the ‘Ambazonian’ economy.

AmbaCoin, with tailored-made features, is an ERC20 crypto-currency which relies on Ethereum as the parent chain. The developers boost of the crypto’s transparency, confidentially and low transaction cost.

The crypto-currency is the latest effort by Cameroon’s Anglophone secessionists to cement the Oct. 1, 2017 symbolic declaration of independence of the “Federal Republic of Ambazonia”. The separatists have in recent times carried arms against the state of Cameroon, enforced a school boycott since October 2016 and a civil disobedience action known as ‘ghost towns’ every Monday.

In addition to the new crypto-currency, ‘Ambazonia’ has an anthem, flag and an interim government, but is yet to be recognized as a nation by any country in the world, unlike the Republic of Biafra which had a short-lived existence but was at one point was formally recognized by Côte d’Ivoire, Gabon, Haiti, Tanzania and Zambia.