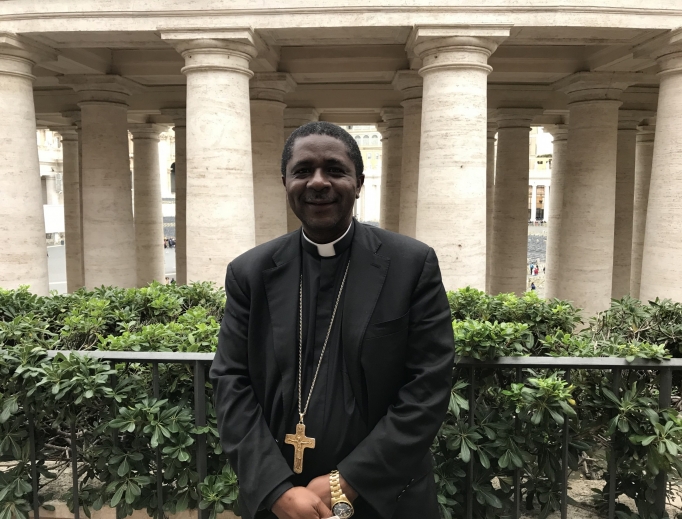 The province corresponds to the territorial circumscription of the North West and South West regions of Cameroon where a separatist war has been raging for six years. The two English-speaking regions constitute 20 percent of the country’s 27 million people.

For decades, people in the two regions have complained of marginalization from the Francophone-dominated administration in Yaoundé.

The pent-up frustrations reached a head in 2016 when Anglophone teachers and lawyers took to the streets to protest what they considered was the overbearing influence of French on the Anglo-Saxon education and Common Law systems practiced in the two regions.

The central government responded with lethal force. A separatist fringe developed and took up arms to fight for the independence of the two regions.

While ending the Marian Year and at the same time launching the Year of the Eucharist on December 6,2022, Nkea said it’s only when the entire family of God raise their voices in supplication to Mary that peace can return to the two regions.

“The Blessings of God have come down upon us in abundance,” Nkea told congregants at the Shrine of Our Lady of Fatima in Abango as he closed the Marian Year launched in December 2021, while launching the Year of the Eucharist.

“We shall appeal for her maternal intercession, so that we can know peace once again in our Church province, which corresponds to the territorial circumscription of the North West and South West regions of Cameroon. This is not our choice. It is not even our decision. It is God Himself who has decided to make it this way.”

Nkea recalled the issues he raised while launching the Marian Year in 2021 during which he dedicated the Bamenda Archdiocese to Marian care.

“Our country has been passing through a lot of difficulties,” Nkea recalls telling Christians back then.

“For the last five years, we have known fighting, killing, destruction of property, and all kinds of evil associated with war. We never knew we could see these things in our country. It is not ending. It is still continuing. Our human intelligence seems to have been blocked while looking for a solution,” Nkea recalls.

Back then, he told Christians in his diocese to raise their voices in unison in prayer for a return to peace, given the incessant killings, rapes, extortions and destruction of property.

He recalled calling on the Christians to not allow “Our Lady to have any rest until peace has come back amongst us and the killings have stopped.”

“Jesus the Prince of Peace must come back to Cameroon, so that we all can say like the Psalmist, ‘in his days justice shall flourish’…”

He had called on Christians to visit the Marian Shrine every week in prayer and supplication to Mary.

“Our Mother Mary cannot be in Heaven and we her children are suffering on earth. All Catholics are invited to pray the Rosary daily – individually, in groups, in families, in small Christian communities, etc., so that our prayer will rise up to Heaven like one big smoke of incense. She (Mary) must hear us. And Jesus must hear us.”

Nkea said those prayers were bearing fruit, a testament to the presence of all the bishops of the Ecclesiastical Province on November 6 at the Shrine of Our Lady of Fatima.

“We never thought it would be this way,” the cleric said. The crisis had always meant difficulties in travelling, and Nkea implied that for clerics and Christians to have turned out in big numbers at the shrine means that peace was gradually returning to the regions.

“We shall not wait until we have total peace before we come to thank Our Lady for what she has done for us. We have gathered here in Abango to close the Marian Year and to tell Mary: “We thank you… We shall continue our prayers, and we shall continue to use this Shrine, so that our prayers shall not cease to storm the gates of heaven for us to have lasting peace.”

“Why shall we not have peace when Jesus is the Prince of Peace?” he asked. “And Our Blessed Mother Mary is the Queen of Peace?”

“Peace is a gift of God, because God is Peace. He blesses his people with Peace. That is why after the Resurrection, Jesus Christ assured his disciples: Peace I give you. My own peace I give you-A Peace which this world cannot give. Such Peace was only possible because Jesus had reconciled us with God and with one another.”

Nkea said only prayer will grant Cameroon that kind of peace.