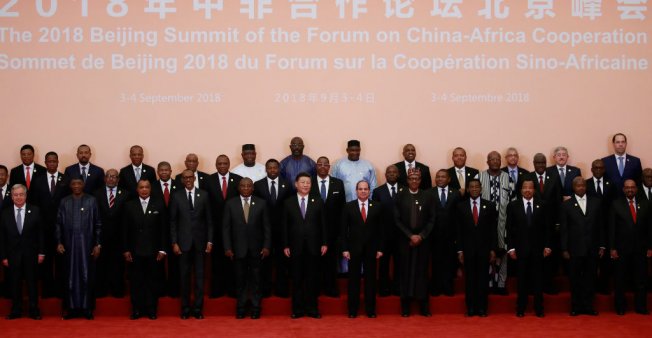 China has for the first time reduced the amount of money pledged to support the promises of the Forum on China-Africa Cooperation, as elements of the event suggest a maturing of Sino-African relations.

Chinese trade with Africa has dropped significantly in recent years, down to $170 billion in 2017 from a peak of $220 billion peak in 2014. As scrutiny of China’s influence in Africa – the debts owed, political involvement via training programmes, military presence – intensifies and Beijing’s own attention is diverted by the emerging trade war with the US, the $10 billion reduction in funding announced at the 2018 FOCAC forum in Beijing this month should perhaps not be seen as a surprise.

At $60 billion, the headline figure for the mix of aid, loans and credit lines promised seems at first glance to match the amount pledged at the previous summit in Johannesburg in 2015. Up until then, the figure had grown dramatically since the triennial summits of the FOCAC programme began in 2006.

This year’s $60 billion pledge comes as more of a mixed bag for African nations, as it actually includes a $5 billion reduction in the overall amount of pledges, loans and export credits at $35 billion, down from $40 billion three years ago. However, the level of concessional assistance to Africa is now $5 billion, the highest rate ever, according to analysis by Johns Hopkins University.

Most noticeably, the figures for the various amounts of government funding add up to $50 billion, and Chinese President Xi Jinping arrived at $60 billion again by including $10 billion in extra investment that Chinese companies would be encouraged to make on the continent. No further details of this were available and Chinese companies here in Ivory Coast are not yet prepared to comment on what the announcement means for them.

Around the prearranged announcements of the forum itself were side events and bilateral meetings as the Chinese hosts sought to integrate their Belt and Road trade initiative more concretely with individual nations. Details are yet to emerge, but some African leaders entered the meetings with clear requests. For example, Kenya’s President Uhuru Kenyatta sought help for an extension for the country’s troubled railway project that has previously been financed by China.

At the continental level, President Xi outlined eight areas of initiative and cooperation including industrialisation and agriculture hailed by the FAO; healthcare, hailed by the WHO; aligning with the African Union’s Agenda 2063 development plan; security and green development, an area in which China is the global leader.

While some African nationals took to social media to criticise their leaders for what they believed was the blind acceptance of Beijing’s will, the mood at the events in the Chinese capital was of genuine cooperation. According to sources at the event, the announcements most welcomed by African delegates were the “five-no” promises, the clarification of five things that China will not do in Africa.

These declarations are a direct response to the growing criticism, predominantly by the West, of what is being called Chinese neo-colonialism across the continent – the notion of saddling countries with debt for useless projects as a way to secure resources. For example, over 90% of Djibouti’s external debt is held by China.

South African President Cyril Ramaphosa, who co-chaired the event with China’s Xi, said at the forum, “In the values that it promotes, in the manner that it operates, and the impact it has on African countries, FOCAC refutes the view that a new colonialism is taking hold in Africa, as our detractors would have us believe”.

Ramaphosa went on to state that: “We are working [together] to build an Africa that is defined by good governance, democracy, respect for human rights, justice and the rule of law,” listing all the areas in which China is most criticised by the West.

The forum’s announcements were immediately accompanied by supportive editorials from China’s state media. The People’s Daily, the publication seen as the most direct link to the Communist Party, pushed out fact sheets on social media defending China’s involvement in Africa.

Back in China, the announcements of funding led to criticism online by Chinese citizens complaining about the amount of money being sent overseas when parts of their own country are extremely poor. Such comments were promptly removed by censors.

It will take some time for the details of the 2018 event to emerge, but the China International Import Expo later this month in Shanghai is now the next China-Africa date on the calendar after Xi announced reduced or free participation for African nations and pledged to create a specific China-Africa trade expo.

The FOCAC events started at the request of African leaders 18 years ago to make bilateral relations more transparent. The triennial summits alternate between China and an African nation playing host. The 2021 FOCAC gathering will take place in Senegal.