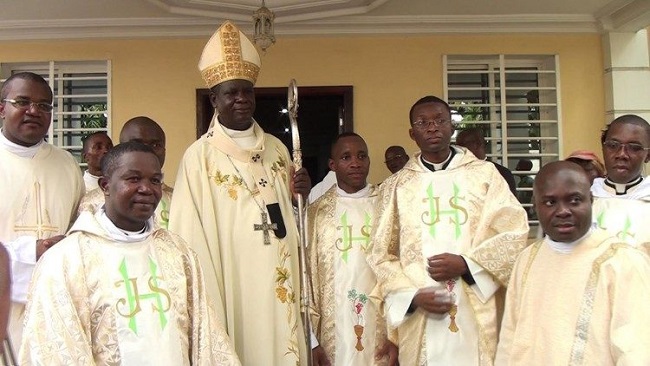 Bishop of Bafia commits suicide: We need to talk about Cameroonian Roman Catholic Bishops and priests 0

Bishop Jean-Marie Balla, has reportedly killed himself under a bridge at Ebebda some 78Km from the nation’s capital Yaoundé. The prelate’s car and a statement left by him saying “I am in the water” suggest that the Roman Catholic Bishop of Bafia would have committed suicide.  Bishop Jean Marie Benoît Bala was appointed Bishop of the Bafia diocese with a Christian population of over two hundred thousand in 2003.

Jean Marie Benoît Bala was born May 1959 in Oweng Mbalmayo. He is originally from Mbankomo in the Mefou-Akono Division (Central Province). In addition to studies in philosophy and theology at the Major Seminary at Nkolbisson, he holds a diploma in Social Sciences and Management from the Catholic Institute of Yaoundé. He was ordained priest in 1987 by the late Arch Bishop Jean Zoa.

The vehicle of the Bishop of Bafia was found on the 31st of May 2017 beside a bridge at Ebebda, a small locality in the department of Lekié, Central region. According to the Senior Divisional Officer for Mban and Inoubou, Maurice Tchoffo, it is difficult at the moment to know what really happened to the Man of God.  Indeed, the prelate’s personal documents were found in his vehicle, as well as a piece of paper containing the inscription “I am in the water” suggesting that he had indeed committed suicide. Bishop Benoît Balla, 58, to many around the world has committed sacrilege that will hunt the Roman Catholic Church in Cameroon forever.

The recovery of our nation from the ruling CPDM crime syndicate, if it is to happen, will require confident and reasonably clean religious leaders not priests who can’t keep their hands off teenage girls or other men’s wives, or whose bishops are unable or unwilling to deal with them. The sudden disappearance of Bishop Balla is an indication that our secular leaders have abandoned the outer defenses of our nation and civilization. Bishop Benoit Balla is among those Cameroonian priests who likely failed in the last stand at the inner defenses and was tolerated by the Roman Catholic Church hierarchy for too long.

It is hard to say at this point but the death by suicide of His Lordship Bishop Balla has stunned many people around the world. He is the first Cameroonian Roman Catholic Bishop to take his own life.  Cameroonians are understandably shocked by the particular circumstances of the tragedy. But when the dust settles around the death of Bishop Balla, and his brother- Francophone Cameroun bishops and parishioners begin to pick up the pieces, it’s vital that some good can be brought out of this tragedy. We of Cameroon Intelligence Report believe and fervently too that there is a danger that when the shock dies down, we all get back to business as usual and there is no discussion about the wider questions.

A core Roman Catholic teaching which often emphasizes the rewards that come with good works or the punishment that comes with sin has been rubbished by Bishop Balla of the Bafia Diocese. So, God’s grace cannot be earned through good deeds if a Bishop who understands the Roman Catholic strictness of the teachings on suicide and how those teachings become internalized among Catholics could afford to end this way.

The end of Bishop Balla has also called into question the act of regularly confessing sins to a Catholic priest. It was generally thought that since suicide is the only sin that could never be confessed to a priest, a Catholic who finds confession important to avoiding Hell may be less inclined to commit suicide. (We will come back to this aspect later).

Roman Catholic teaching on suicide is clear. As set out in Blessed John Paul II’s Evangelium Vitae (#66): Suicide is always as morally objectionable as murder. The Church’s tradition has always rejected it as a gravely evil choice. Even though a certain psychological, cultural and social conditioning may induce a person to carry out an action which so radically contradicts the innate inclination to life, thus lessening or removing subjective responsibility, suicide, when viewed objectively, is a gravely immoral act. In fact, it involves the rejection of love of self and the renunciation of the obligation of justice and charity towards one’s neighbour, towards the communities to which one belongs, and towards society as a whole. In its deepest reality, suicide represents a rejection of God’s absolute sovereignty over life and death, as proclaimed in the prayer of the ancient sage of Israel: “You have power over life and death; you lead men down to the gates of Hades and back again” (Wis 16:13; cf. Tob 13:2).

Suicide is indeed a mortal sin. If it be not only ‘as morally objectionable as murder’, but ‘always’ so, it is difficult to understand how it might be forgiven before the Throne of Judgment. It is right to say that Bishop Balla of the Bafia Diocese who committed suicide may not possess an informed intellect (ie know that suicide is wrong); and he may not have given full consent of the will (ie intended to commit the action). If he killed himself out of fear or psychological imbalance or emotional stress, there cannot be full consent since these impede the exercise of the will and mitigate responsibility. The Catechism states: ‘Grave psychological disturbances, anguish, or grave fear of hardship, suffering, or torture can diminish the responsibility of the one committing suicide’ (#2282).

But in this Bishop Balla suicide there is something which ought to alarm the Roman Catholic Church at the very highest level-the strong ties between the Francophone Roman Catholic Bishops and the barons of the ruling CPDM government.

All suicide is tragedy.  So, yes, we need to talk about Bishop Balla. But let us not do so apart from institutional systems, outdated dogma and overbearing hierarchy. The suicide may as well be an act staged by hired security agents from the state or from abroad.