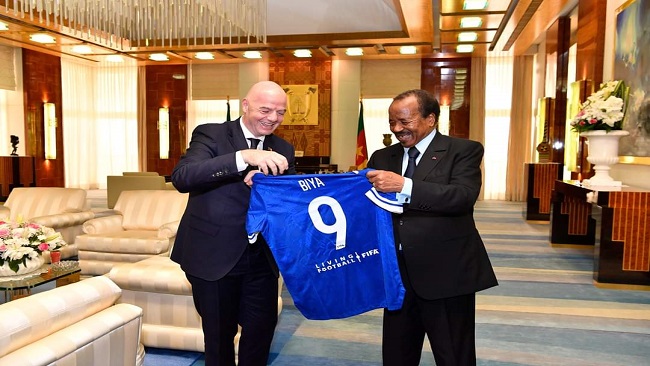 Biya’s communication agents posted on his face book page that the butcher of Yaoundé was delighted to meet with Gianni Infantino, on the eve of the opening of the 2021 African Nations Championship.

After all the tongue-biting, pride-swallowing moments with the former CAF President Ahmad Ahmad where Biya and his CPDM crime syndicate employed strategic silence or florid flattery to stay in FIFA’s good graces, both men reportedly discussed the development of soccer in Cameroon in particular and in the world in general.

Mr. Infantino arrived in Cameroon a few hours ago and will attend the opening of CHAN tomorrow, January 16. He was accompanied to the so-called Unity Palace by the acting president of CAF, Constant Omari and the president of FECAFOOT, Seidou Mbombo Njoya.