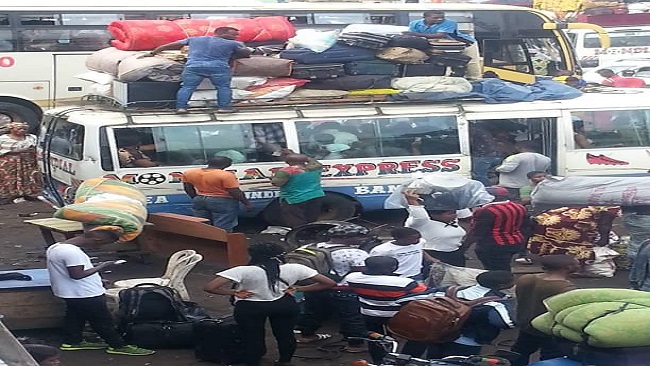 Local authorities in Southwest, one of the two crisis-hit English-speaking regions of Cameroon, on Saturday stopped families from relocating to French-speaking side of the country.

“We are not stopping them from travelling but those who are about leaving their homes you can see luggage here including furniture, beds. Where are they going? We want them to stay at home. The security and defence forces will guarantee their security,” the region’s governor, Bernard Okalia Bilia, told reporters after intercepting luggage-bearing buses from travelling.

The governor’s decision was taken after people began departing from the troubled region in large numbers following threats from armed separatist forces that circulation of vehicles will be stopped ahead of the Oct. 7 presidential poll.

The separatists have threatened to disrupt the election but Bilia said adequate measures have been taken to ensure a hitch-free vote.

Since November last year, government forces have been clashing with armed separatists in the Northwest and Southwest, the two Anglophone regions of the country where about 80 percent of population are native in French.

The armed separatist forces have declared an independent state in the two regions called “Ambazonia.”

According to the United Nations, over 180,000 people have been displaced internally and at least 30,000 have escaped to Nigeria where they now live in refugee camps.