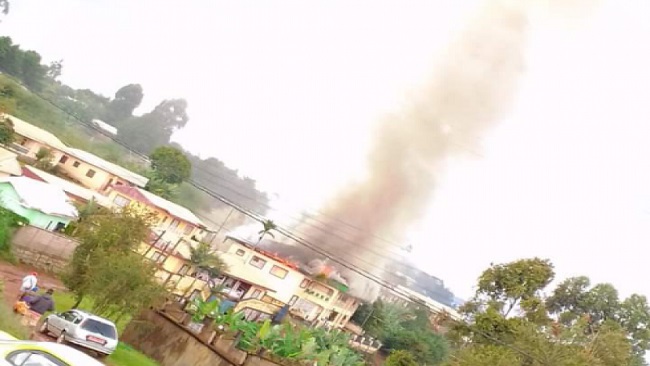 A statement attributable to Cameroon’s Minister Delegate at the Presidency of the Republic in charge of Defense says Friday’s fire outbreak at the Command Post of the Bamenda Territorial Gendarmerie Unit was the result of an electrical accident.

In a press release Monday, October 19, 2020, Commander Atonfack Guemo Cyrille Serge, Head of Communication Division at the Ministry of Defense dismissed allegations that the fire incident may be related to the ongoing socio-political unrest in Southern Cameroons.

Atonfack Guemo says preliminary results of the investigations carried out by the competent services suggest that the fire outbreak developed from the electricity meter supplying the building.

“The Minister Delegate at the Presidency in charge of Defense informs as follows: In the afternoon of Friday, October 16, 2020, at about 4:30 pm, a fire broke out in the building hosting the Command Post of the Bamenda Territorial Gendarmerie Unit, located at Up-Station,” Atonfack Guemo said in a press release. “The quick intervention of firefighters together with the combined effort of elements of the National Gendarmerie and residents of the locality made it possible to contain the flames and bring the fire under control at about 7:00 pm.”

From the first indications of the investigations that have been launched, Atonfack Guemo went on, it appears that the fire was an accident caused by the sudden return of electric power in Bamenda after a power outage that led to a shock on the electricity meter supplying the building.