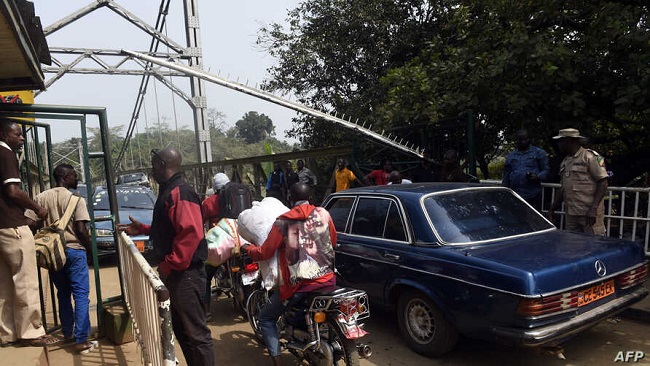 Cameroon says it is increasing security along its borders with the Central African Republic and Nigeria after suspected rebel incursions and interceptions of vehicles transporting explosives.

Government officials and the military braved a heavy downpour in northern Cameroon Monday to visit the commercial town of Pakete on the border with Nigeria. Jean Abate Edi, governor of Cameroon’s North region where Pakete is located said his trip is to make sure that the border with Nigeria is immediately secured.

He said intelligence reports at his disposal indicate that security is threatened on Cameroon’s northern border with Nigeria. He said henceforth vehicles known locally as Starlettes are prohibited from transporting goods into Cameroon from Nigeria and that the military has been reinforced along the Nigerian border.

Edi did not say how many more troops have been deployed to the border zone.

Jude Mofor, coordinator of a government operation to secure the border zone, said he invited the governor and his top officials because of the increasing wave of insecurity along the border. He says last week the military intercepted two vehicles bringing into Cameroon explosives from Nigeria. He said Starlettes are increasingly being used in transporting illegal and prohibited goods.

“As our normal duty, we control everything that enters the country. This Starlette was coming and then we stopped it and it refused to stop. Our boys used a special technique that we have to stop vehicles. While controlling, the two occupants of the vehicle ran away. It is then we discovered this stock of explosives,” he said.

Mofor said they had opened investigations to determine the origin and destination of the explosives. He said they also seized and were keeping what he described as huge quantities of prohibited goods from Nigeria that may undermine the security of Cameroonians.

The governor said he suspected that the explosives were either destined to commit atrocities in Cameroon or were in transit to the troubled neighboring Central African Republic.

Robinson said he has increased troops on that border because Cameroon has within a week reported eight incursions from suspected C.A.R. rebels.

“We came to analyze the operations ongoing so that the success we are recording these days should continue. We came down also to talk to our soldiers to make them know that they have to carry out their mission with professional consciousness. We want to end by calling on the population to go towards those soldiers to denounce [suspects] and then they [the military] will be able to defend them [easily],” he said.

Robinson said in one of the incursions, the rebels left with an undisclosed number of cattle and money they seized from ranchers in the border town of Tignere.

Civilians said two other attacks on merchants were reported in the border town of Galim. They said the rebels also seized gasoline and fled on motorcycles.

The Cameroon military said it seized war weapons from the rebels who had attacked to gain supplies but gave no further details.

Cameroon shares an 800-kilometer long boundary with the landlocked C.A.R. There are currently some 250,000 C.A.R. refugees in Cameroon.

For the past eight years, sectarian Christian and Muslim militias in C.A.R. have been waging war against each other with horrific violence.