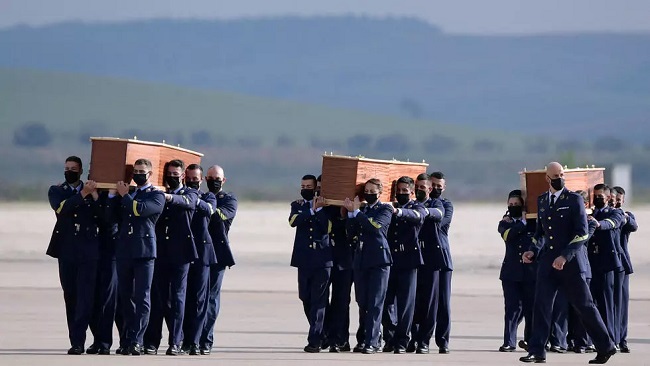 The bodies of three Europeans killed in Burkina Faso were flown to Spain on Friday, with Madrid pledging to keep up a “relentless” fight against the jihadist insurgency raging in Africa’s Sahel region.

The two Spanish journalists and an Irish wildlife activist were ambushed during an anti-poaching patrol in the impoverished West African nation which has been struggling with a surge in Islamist attacks since 2015.

Journalists David Beriain and Roberto Fraile were with Rory Young, head of the Chengeta Wildlife group, in the Arly National Park in eastern Burkina Faso when the attack occurred on Monday.

They were with a group that included soldiers and forest rangers when the assailants turned up in pickup trucks and on motorbikes, with the three Europeans initially reported missing.

The Burkina authorities said they had been “executed by terrorists”, becoming the latest victims of the ruthless Islamist insurgency gripping one of the poorest countries in the world.

Spanish Foreign Minister Arancha Gonzalez Laya and Defence Minister Margarita Robles were on the tarmac at Torrejon de Ardoz airbase as three wooden coffins were carried off the plane by 24 air force officers.

The pair had been working on a documentary on conservation in Burkina Faso.

The Irish ambassador to Spain, Sile Maguire, was also at the airbase.

Young’s body was to be flown back to Ireland later on Friday, the Spanish foreign ministry told AFP, without giving further details.

‘We will be relentless’

Hailing the pair for “doing so much to give a voice to the voiceless,” Gonzalez Laya said the government was posthumously awarding them the Order of Civil Merit “for their work in pursuit of a journalism that enhances our democracy”.

The violence had highlighted the importance of Spain’s continued involvement in “efforts for peace and stability” in the war-torn Sahel region, she said.

Extending condolences to the families who were also at the airport but not on the tarmac, Robles said Spain would do “everything possible to find out who was behind these appalling acts”.

She vowed that Spain would press ahead with efforts to help those fighting the Islamist insurgency in the region.

“The fight against terror in these areas is not going to stop, we will be relentless,” she said.

Burkina, Chad, Mali, Mauritania and Niger have joined forces in a French-backed alliance called the G5 Sahel to fight jihadism on the southern edge of the Sahara, with the initiative also backed by Spain, Germany and Italy.

In a joint statement on Friday, Spain, France, Germany and Italy pledged continued security support for nations in the Sahel region which stretches from Senegal to Sudan and has turned into a hotbed of lawlessness over the past decade.

“We will continue existing initiatives to support the armies of the region, as well as the gendarmerie and internal security forces in their operations, training and capacity building,” they said.

Since 2015, more than 1,300 people have been killed and one million have fled the violence in Burkina Faso, which has ravaged this land-locked nation’s once-vibrant tourist industry