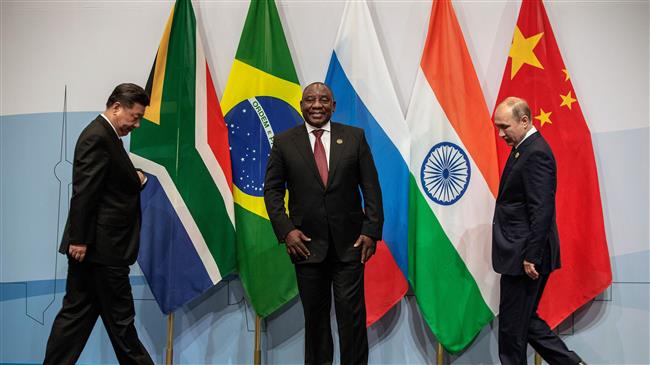 The member states of BRICS, the association of five major emerging economies, have pledged to strengthen their economic cooperation as the US continues to beat the drum for trade war and unilateralism.

“We express concern at the spill-over effects of macro-economic policy measures in some major advanced economies,” the heads of the BRICS group — Brazil, Russia, India, China and South Africa – said in a joint statement on Thursday after meeting in Johannesburg for an annual summit.

They added that the multilateral trading system is facing unprecedented challenges, stressing the importance of an open world economy.

Addressing the 10th BRICS summit in South Africa on the second day of the talks, Chinese President Xi Jinping said, “We should stay committed to multilateralism”.

He further called on BRICS members states to deepen strategic partnership and open up the second “golden decade”.

Putin also addressed the summit, saying, “BRICS has a unique place in the global economy — this is the largest market in the world, the joint GDP is 42 percent of the global GDP and it keeps growing”.

“In 2017, the trade with our BRICS countries has grown 30 percent, and we are aiming at further developing this kind of partnership,” he said.

US President Donald Trump has said he is ready to impose tariffs on all $500 billion (428 billion euros) of Chinese imports, complaining that China’s trade surplus with the US is due to unfair currency manipulation.

Trump has slapped levies on goods from China worth tens of billions of dollars, as well as tariffs on steel and aluminum from the EU, Canada and Mexico.

The BRICS summit is taking place in Johannesburg between July 25 and 27. Heads of state or government from the five member states (Brazil, Russia, India, China and South Africa) are discussing areas of possible cooperation.