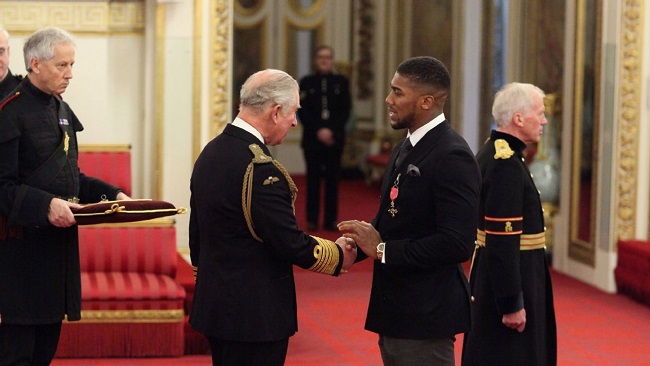 British heavyweight boxer Anthony Joshua has been awarded by the Royal Family for his services to Sport. The award of an OBE bestowed on him by the Prince of Wales. Joshua is currently a unified world heavyweight champion, holding three of the four major championships in the sport.

An OBE simply means: (Officer of the) Order of the British Empire. The event took place on Thursday December 20, 2018.

Anthony Joshua who has Nigerian roots currently holds the IBF, WBA and WBO heavyweight belts. He has fought 22 fights and won all with all but one coming by way of knockouts.

Anthony Joshua was born in Watford to a Nigerian mother and a British father of Nigerian and Irish descent. He has lived some parts of his life in Nigeria until his boxing debut in 2013.

Joshua expressed interest in representing Nigeria at the 2008 Olympic Games in Beijing, but wasn’t selected. He has since climbed the ladder to be the unified World Heavyweight Boxing Champion under the British flag.