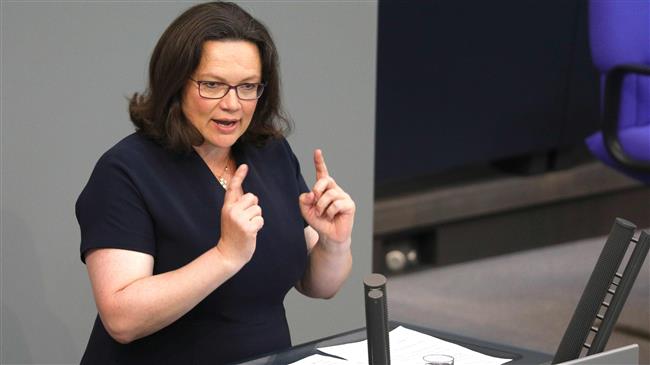 Bundes: SPD leader warns US envoy over talks with carmakers 0

Leader of Germany’s Social Democratic Party (SPD) has slammed the new US envoy to Berlin for quietly engaging in talks with major German carmakers over a trade dispute between Washington and the European Union.

US Ambassador to Berlin Richard Grenell has reportedly been in talks with the heads of German carmakers such as BMW, Daimler and Volkswagen. He argues he is empowered by the US administration to work out a solution to the trade dispute.

Grenell, a staunch supporter of President Donald Trump, suggested a “zero tariff” solution, which requires both Berlin and Washington to lift all tariffs on automobile imports from their respective countries.

His closed-door talks, however, prompted a response from SPD leader Andrea Nahles, who said Germany is not “a banana republic.”

“That is news to me that ambassadors hold talks on such issues. What kind of an approach is it?” she said.

“If the US government wants to talk about tariffs with us, then this issue must be discussed between the US Secretary of Commerce and German Minister for Economic Affairs and Energy Peter Altmaier. We are not some kind of banana republic!” Nahles added.

Trump hit the EU, Canada and Mexico with tariffs of 25 percent on steel and 10 percent on aluminum at the start of June, ending exemptions that had been in place since March.

“If these Tariffs and Barriers are not soon broken down and removed, we will be placing a 20% Tariff on all of their cars coming into the US Build them here!” Trump said last month.

The EU also imposes a 10-percent tariff on imported US cars.

Not long after his arrival in Berlin in May, the US envoy prompted anger in Germany by calling on German companies via Twitter to “wind down operations in Iran immediately.”

The move was part of a broader policy taken by the Trump administration to convince European companies to voluntarily disengage with Iran after Washington pulled out from a 2015 landmark nuclear agreement.