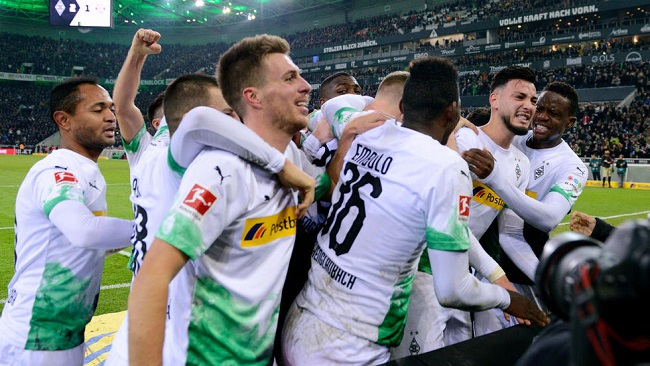 Match-winner Ramy Bensebaini admitted needing a reminder before taking the late penalty which sealed a 2-1 win for Bundesliga leaders Borussia Moenchengladbach and left ten-man Bayern Munich sixth in the table.

A superb Ivan Perisic shot put Bayern ahead before Algeria international Bensebaini powered home a header on the hour mark.

He then showed nerves of steel to convert a late penalty after Javi Martinez was sent off for a second yellow card.

However, the 24-year-old Bensebaini admitted that, in the heat of the moment, he had forgotten being nominated Gladbach’s penalty taker.

“After (last Saturday’s 4-2 win against) Freiburg, we decided Breel (Embolo) wouldn’t be taking penalties anymore and it was agreed that I would take the next one, but I had forgotten,” Bensebaini told Sky.

Embolo had missed a penalty in last week’s victory.

“It was (replacement goalkeeper) Tobias Sippel who reminded me that it was down to me to take the kick.”

The left-back coolly converted the spot kick, conceded by Bayern defender Martinez, who was shown a second yellow and sent off, for a clumsy tackle on Gladbach winger Marcus Thuram.

“We’re going to do everything we can to stay top of the league. We’re going to go hard into all the games, then we’ll see,” Bensebaini added as Gladbach celebrated their ninth week in first place.

For Bayern, it was poor preparation for their attempt to become the first German club to win all six matches in the Champions League group stages when they host Jose Mourinho’s Tottenham at the Allianz Arena on Wednesday.

Bayern only had themselves to blame after squandering a string of chances, six of which came in the first-half alone, just as they did in last Saturday’s 2-1 home defeat to Bayer Leverkusen.

“It annoys me to have lost the last two games when we were always the better team and created the most chances,” said interim coach Hansi Flick.

“Of course, the situation is not nice — we’re all unhappy with what we have gotten out of the last two games.”

“We clearly dominated in the first-half and missed a lot of goal chances. After going 1-0 up, we forgot to play.

“Now we have to win our last three games before the (January) winter break and make up one or two points.”

Having been put in charge until January after Niko Kovac was sacked in early November, Flick, 54, had been tipped to see out the season as coach after winning his first five games, but two straight defeats have narrowed his chances.

Flick must wait until after Bayern’s final game of the year — at home to Wolfsburg in a fortnight — before discovering his fate.

“I am not thinking about it at all, because there are lots of other things I need to take care of,” he said with the Spurs match looming.

“It fits… but now we have to win our next three (league) games. Whenever FC Bayern loses, it’s not very nice.”