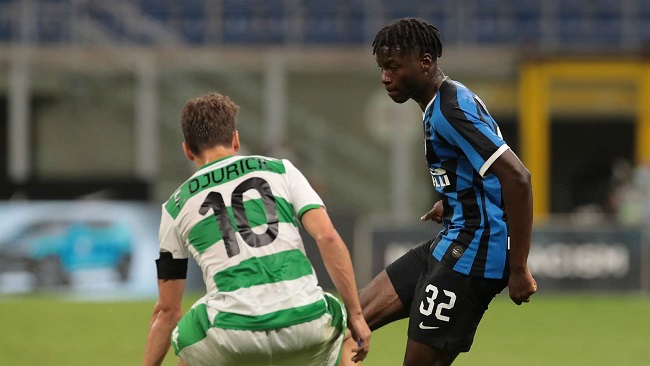 Lucien Agoume has expressed his feelings after playing a part in Inter Milan’s 3-3 draw against Sassuolo in Wednesday’s Serie A fixture.

The Yaounde-born midfielder replaced Christian Eriksen in the 62nd minute for his second appearance in Antonio Conte’s team this term since his summer-signing from French club Sochaux.

Goals from Romelu Lukaku, Cristiano Biraghi and Borja Valero were not enough to give the Nerazzurri maximum points at the San Siro Stadium.

During the 28 minutes he spent on the pitch, Agoume completed 10 passes with a 100 per cent accuracy, and he also managed three tackles – the third-highest by an Inter player after defenders Milan Skriniar and Andrea Ranocchia.

In his reaction, the 18-year-old rued Inter Milan’s missed chances as the dropped points leave them unmoved from the third spot in the Serie A table with four points behind second-place Lazio and eight points behind leaders Juventus.

“I am happy to have entered today even if the result is a pity. We had many opportunities, we had to win,” Agoume told the club website.

He made his league debut against Fiorentina last December, and he has disclosed how he is working to make himself a better player in Italy.

“I always try to work to be available to the coach when he needs me and I hope to continue like this,” he added.

“I try to learn from everyone, in my role there they are many strong players, I want to learn the best to improve more and more.

“Everyone told me to be calm, to play as I can do without haste. I tried to do it when I entered.”

Although born in Cameroon, Agoume also has a French nationality and he has represented the European country across their U16, U17 and U18 youth teams.

He led the France U17 team as captain to the 2019 World Cup in Brazil where they won bronze.

The 18-year-old is currently France U18 captain and he is still eligible to play for Cameroon at senior level.