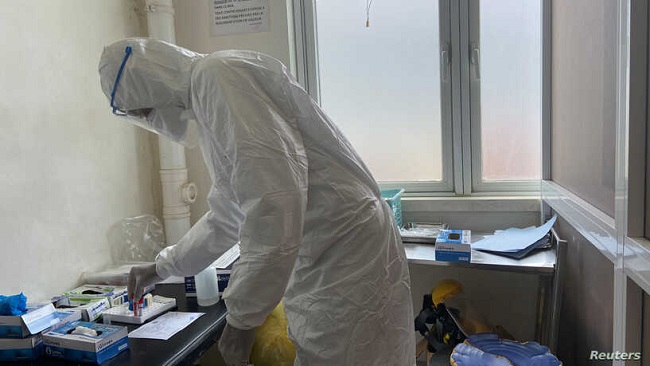 Medical staff in Cameroon are asking for additional security at hospitals following a series of attacks by people upset that they or their loved ones were diagnosed with the coronavirus. Cameroon so far has 3,300 confirmed cases of the virus with 147 deaths.

Speaking by phone from the coastal city of Douala, Atedjoe said health workers are being attacked by people who either contest tests showing them positive for COVID-19, or reject medical reports that their relatives died of coronavirus.

He said the National Medical Council of Cameroon is scandalized and wants to state categorically that it is totally inadmissable to attack medical staff members who are simply carrying out their duties of saving lives. He said they are asking the government to increase protection at hospitals and to educate civilians to desist from attacking health workers because within the past three weeks, medical doctors, nurses and laboratory technicians have been attacked on a daily basis.

The Medical Council reports attacks in seven hospitals since Thursday. Six workers sustained injuries and are being treated, and eight others sustained minor injuries.

In the most extreme attacks, doctors said that last week, angry crowds exhumed at least four corpses of people buried after they died of COVID-19 in the cities of Douala and Bafoussam to stop the spread of the killer virus.

The exhumers said they wanted to give the bodies a proper burial.

Some people wear masks as they walk by the entrance to the Yaounde General Hospital in Yaounde on March 6, 2020 as Cameroon has…

Awah Fonka, governor of Cameroon’s Western Region where Bafoussam is found, said health workers who tried to stop the crowds were attacked and beaten.

Fonka, speaking via a messaging app from Bafoussam, said the lives of the health workers were saved only when the police arrived and dispersed the mobs. Police and health care workers then reclaimed and reburied the bodies.

“It is unbelievable, unacceptable that a medical doctor or medical personnel should be putting up a fight over a corpse with a family. They [the crowds] should understand that these people [the health care workers] are coming to help so that they should not be infected,” said the governor.

Cameroon’s Health Minister Manaouda Malachie has condemned the attacks and said he is calling on all Cameroonians to accept the reality that COVID-19 exists and is killing people.

Speaking on Cameroon state radio CRTV, he said measures have been taken to increase security at hospitals.

He said President Paul Biya has asked him to encourage and tell all health workers that he is aware of the challenges they face and has given instructions to the government to take necessary measures to protect them. Manaouda says Biya and his government are very much appreciative and will never abandon Cameroon medical staff members in their efforts to conquer COVID-19.

On May 1st, Cameroon eased restrictions put in place to curb COVID-19. The government is still asking people to protect themselves by washing their hands regularly and keeping a distance of a least a meter and a half from people.

It has also warned people against believing that COVID-19 has been conquered, or even worse, doesn’t exist.