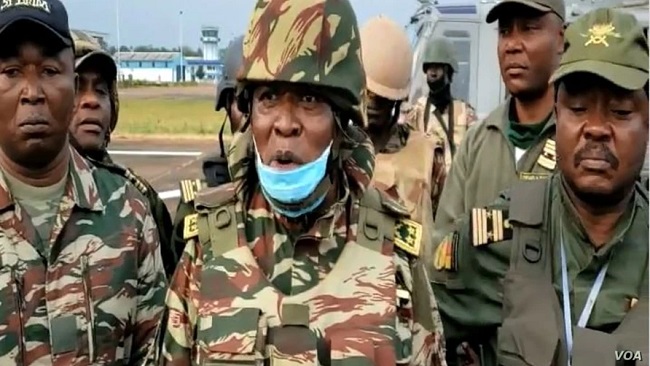 Cameroonians are complaining of increasing human rights abuses as the central African state intensifies raids on English-speaking rebel camps.  The military says within the past week, at least 23 separatist rebels and three soldiers have been killed, but local people say most of those killed were unarmed civilians. The military is denying the accusations. There are growing calls for investigations of alleged human rights abuses by troops.

He said he has instructed the military to remain professional and respect human rights as they destroy all separatist camps and kill rebel fighters who refuse to drop their weapons. He said people should cooperate with troops risking their lives to protect civilians. He said peace must return to Cameroon’s English-speaking regions.

Nka said two soldiers were killed and another died after a roadside bomb damaged a military vehicle in the town of Kumbo. The general said a self-proclaimed separatist general called Assan died during the raids while 11 rebel fighters were arrested.

The government said another self-proclaimed general called Elangue Godwin surrendered to troops fighting rebels in the South-Western town of Kumba.

Separatists have acknowledged the attacks and the killing of their general on social media. They also acknowledged that one of their fighters surrendered but said only three fighters died. The separatists said they killed nine troops in Kumba.

Thirty-two-year-old honey seller Ernest Kebam fled from Oku, a district in the North-West region on March 3. He said he does not trust the military claims that troops respect human rights. He said his uncle, also a honey seller, was among several civilians who were tortured and killed in Oku. He said people he saw in military outfits tortured civilians and looted homes. He spoke via a messaging app from Douala.

Joseph Vincent Ntuda Ebode is a lecturer in international security and defense at the University of Yaoundé-Soa. He said Cameroon, as a signatory to all human rights conventions, should conduct an independent investigation of claims of abuses by its troops. He said people want to be sure that their rights are not abused by the military that claims to be defending civilians.

This is not the first time Cameroonian soldiers have been accused of human rights abuses.

Last week, Cameroon described as grossly exaggerated a Human Rights Watch report that its military raped 20 women, including four with disabilities, and arbitrarily arrested and beat men, but the abuses went unreported for a year. HRW said the victims did not report the abuses for fear of reprisal from the military. Cameroon said the report lacks credibility. Officials acknowledged that 35 men were arrested in the English-speaking southern village of Ebam, but denied there were abuses.

Separatist have been fighting since 2017 to form an English-speaking state within the majority French-speaking country.

Rights groups accuse both the military and rebels of atrocities during the conflict in the English-speaking western regions, which the U.N. says has left over 3,000 people dead and more than half a million displaced.