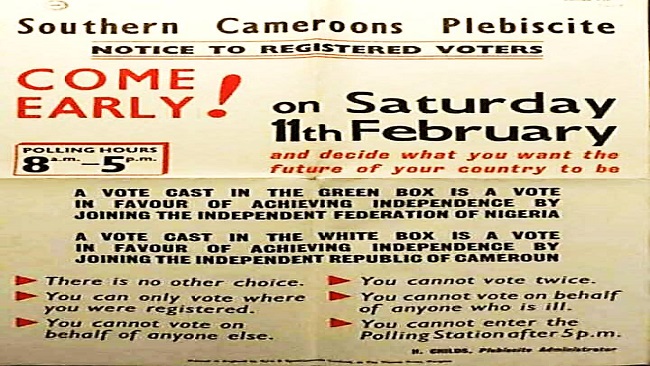 Cameroon was never ONE: The AGBAW-EBAI DEBATE 0

A Referendum is now the only solution to the Anglophone crisis. To Biya and his sycophants who claim “an overwhelming majority” of Anglophones want to remain in bondage and servitude in Cameroon; to Anglophone regime apologists and fifth columnists who benefit from the crumbs served by their paymaster and see nothing wrong with the genocide against their own people; to those ass-kissing Anglophones who blame the Diaspora for inciting and financing the struggle; and to all those who believe Ambazonia independence is non-negotiable; here is my challenge. stop the senseless mayhem and bloodbath and invite the UN to come in and organize a referendum as was the case in 1961. Only Anglophones will be allowed to vote as was the case in 1961 and voting will take place ONLY in Anglophone Cameroon as was the case in 1961 and registration will be done at the village level. The results will be binding on all stakeholders. Until that happens, for “an overwhelming majority” of Anglophones, it is now freedom or death…the struggle continues