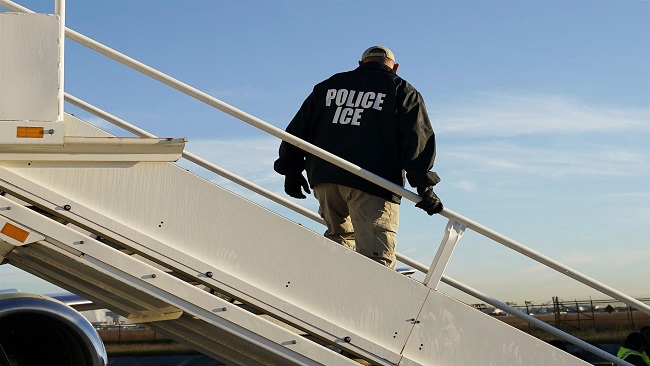 Two Cameroonian men slated for deportation from the United States were pulled off an ICE flight moments before takeoff on Tuesday as part of an investigation into abuse they alleged they endured in U.S. custody, according to an ICE official with direct knowledge of the incident and immigration advocates.

The two men are part of a group of eight Cameroonian asylum seekers who alleged ICE coerced them into signing their deportation documents through force, including the use of pepper spray. Others who alleged abuse were never taken to the airport, their lawyers told NBC News. It is not clear, however, if any of the eight have been deported.

The allegations were detailed in a complaint brought on behalf of the men by the Southern Poverty Law Center, Freedom for Immigrants, the Cameroonian American Council and others and sent to the Department of Homeland Security’s Office of Inspector General and Civil Rights and Civil Liberties section.

“I can’t see well still from the pepper spray. As a result of the physical violence, they were able to forcibly obtain my fingerprint on the document,” one of the men, who remained anonymous, said in the complaint.

In response to the allegations in the complaint, ICE spokesman Bryan Cox said: “ICE does not comment on specific matters presented to the Office of the Inspector General, which provides independent oversight and accountability within the U.S. Department of Homeland Security. That said, in general, sensationalist unsubstantiated allegations are irresponsible, and should be treated with the greatest of skepticism.”

He added: “ICE is firmly committed to the safety and welfare of all those in its custody. ICE provides safe, humane, and appropriate conditions of confinement for individuals detained in its custody.”

An ICE official said some of the men were kept back in order to be interviewed by the investigating agencies, but that does not mean they will not be deported at a later date.

Human rights groups say those deported are likely to face grave risks upon their return to Cameroon, including the threat of execution.

“Our government utterly failed to provide these individuals the safety and refuge they came looking for,” said Luz Lopez, senior supervising attorney with Southern Poverty Law Center‘s Immigrant Justice Project. “They fled persecution only to be met with ICE detention and a one way flight back to being in harm’s way.”