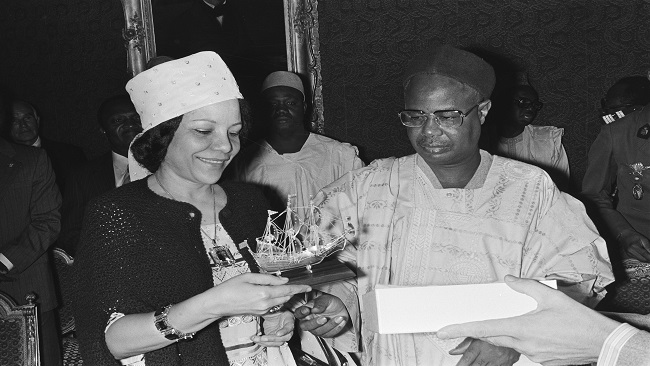 The wife of the first president of the Republic of Cameroon, Ahmadou Ahidjo has reportedly passed away in the main hospital in Dakar (Senegal), at the age of 89. First Lady of Cameroon from 1960 to 1982, Germaine Habiba Ahidjo was born in Mokolo in 1932. In 1942, she obtained her school certificate in Yaoundé and then joined the Douala Girls’ College, now the New-Bell High School.

In 1947, through Louis Paul Aujoulat, the Territorial Assembly granted her a scholarship to France where she obtained a state nursing diploma in 1952 and specialised in tropical diseases at the Pasteur Institute in 1953. She married a Lebanese man named Touffic, with whom she had a son, Daniel Boubakari, who settled in Bafoussam. She divorced him before returning to Cameroon.

In 1955, she met Ahmadou Ahidjo, who officially married her on 17 August 1957. She was then a nurse specialised in tropical diseases. With Ahmadou Ahidjo, she had three daughters: Babette, Aissatou and Aminatou (CEO of the Yaoundé Conference Centre).

After her husband resigned in November 1982, and was sentenced to death in absentia for his involvement in the failed coup of 1984, she could not return to the country with him and moved to Dakar (Senegal), where she still lived. Her husband died there on 30 November 1989 and was buried. Since then, she has been campaigning for his official rehabilitation and above all, for the repatriation of his remains to Cameroon. She was a reserved person who put her advice at the service of her husband.