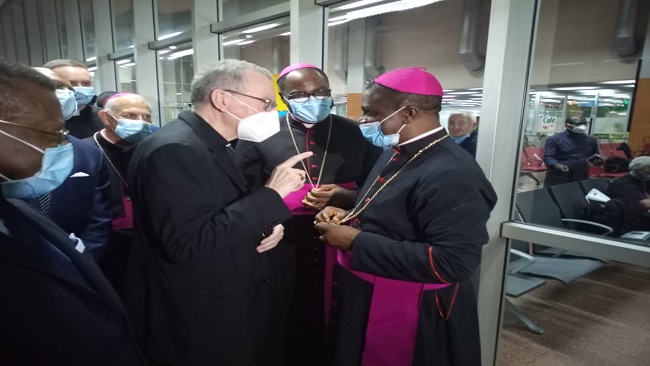 Can Vatican visit to Cameroon break the Ambazonia crisis stalemate? 0

Cameroon’s government displayed an “openness” towards dialogue for solving the country’s ongoing Anglophone crisis, during a visit by the Vatican’s number two earlier this week, according to a top church official from the Anglophone regions.

“There is a kind of openness for dialogue,” said Andrew Nkea, Archbishop of Bamenda. “But how this is going to come about, I think we must also be discreet in the way we handle those things.”

Cardinal Pietro Parolin, the Vatican’s secretary of state, completed a visit to Cameroon on Wednesday, after a five-day trip during which he met President Paul Biya and held mass in Bamenda, the capital of the North West Region.

Fighting between armed separatists and Cameroon’s military continues in the North West and South West regions. The Catholic Church believes the only way to stop fighting and end the conflict is to hold talks between the warring sides.

“The cardinal was able to say to all the powers that be that dialogue was the most important tool for the solution of this problem,” Nkea told Africa Calling podcast, referring to discussions he sat in on between Parolin and the government.

Parolin’s visit to the Anglophone regions was marked by deserted streets, as armed separatists called for a boycott of his trip to Bamenda, but nevertheless, many church goers showed up at his mass.

Fighting and violence also continued during Parolin’s visit as three people were allegedly killed by Cameroonian soldiers on 31 January in the village of Semndzen, located in Bui Division in the North West Region.

Troops were searching for separatists, locally known as Amba Boys, and allegedly shot three villagers in the bush who were tapping palm wine, mistaking them for fighters, according to information RFI received.

Cardinal Parolin said during his trip to Cameroon that the Catholic Church, at both a local level and in Rome, is ready to facilitate dialogue between Yaoundé and the separatists.

“This facilitation depends on the actors involved, we cannot force the partners to dialogue,” said Nkea, in an interview.

Both the government and separatists have at times viewed the church’s efforts for mediation with some suspicion.

Local church leader Cardinal Christian Tumi had been trying to help bring fighting to an end, however, he was kidnapped by gunmen in the North West region on 5 November.

Nkea would not be drawn on what the next steps for possible mediation might be, but mentioned steps and instruments that need to be put in place to lay the groundwork for any talks. “Now, it’s modalities,” he added.

“Things have moved at least a step forward,” said Nkea, describing candid talks with the authorities in Yaoundé.

“One of the big problems we’re talking about in this dialogue is there are at least 8 to 10 different leaders of the separatist groups,” said Bamenda’s archbishop, underlining the importance of including everyone.

“This needs time, and that’s the delicate aspect of it,” said Nkea.

Fighting started following protests in 2016 by Anglophones over perceived marginalisation by the Francophone ruling majority.

A crackdown on demonstrations led to a self-proclamation of independence for a state called Ambazonia and ultimately fighting between the army and separatist fighters.

Both separatist groups and Cameroon’s military have been accused of killing civilians and committing rights abuses during the Anglophone crisis.