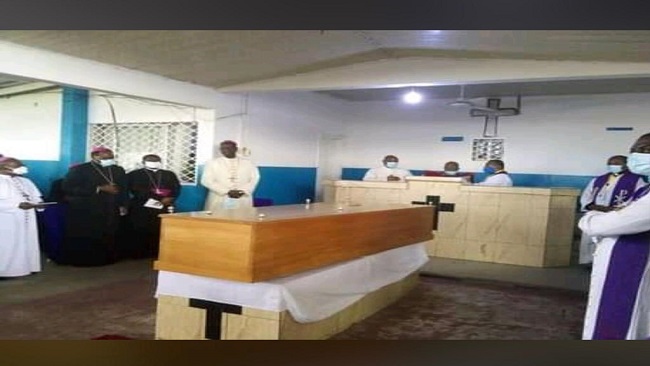 The late Archbishop Emeritus of Douala His Eminence Cardinal Christian Tumi, has embarked on his final journey home to rest. The funeral ceremony of the 91-year-old cleric, who died on Saturday, April 3, 2021 in Douala, is spread over two days.

The funeral rites started today Monday at 11am at the Douala Military Hospital in the Bonanjo district in Douala. The vigil mass will be held at 8pm at the Cathedral of Saints Paul and Peter in Bonadibong, and a Eucharistic Celebration on Tuesday 20 April 2021 at 10am.

All the bishops of Cameroon have converged in Douala, after they recently met at the 46th Plenary Assembly of the National Episcopal Conference in Yaoundé.

In his opening remarks, Bishop Abraham Kome, Bishop of Bafang and President of the National Episcopal Conference of Cameroon, expressed the sorrow of the entire Church of Cameroon, following the passing to eternity of His Eminence Cardinal Christian Tumi and invited the Bishops and all Christians to continue to pray to the Risen Lord to open the gates of the Kingdom to this dedicated pastor.

By Rita Akana in Douala