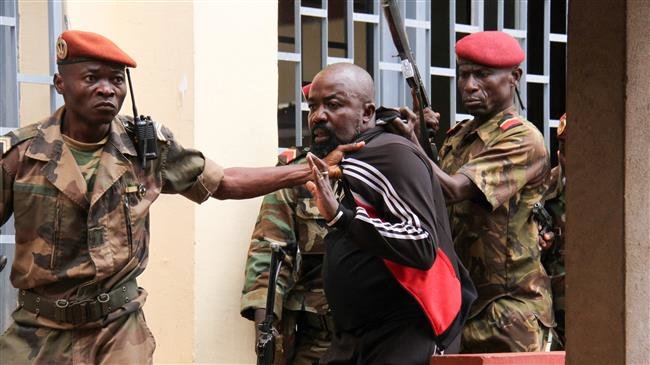 A former militia leader from the Central African Republic (CAR), nicknamed “Colonel Rambo,” has arrived at the International Criminal Court (ICC) headquarters in The Hague to stand trial.

Alfred Yekatom, 43, was transferred to the ICC detention center in the Dutch city on Saturday and will later stand trial for war crimes and crimes against humanity.

The former army officer, who became a lawmaker elected to parliament in 2016, is accused of ordering some 3,000 anti-Balaka Christian forces under his command — which included child soldiers — to carry out deadly attacks against Seleka Muslims between December 2013 and August 2014 in the capital, Bangui, and other locations.

“Now, he must answer in court for his actions,” the court’s chief prosecutor, Fatou Bensouda, said in a statement.

Bensouda thanked those who came forth to launch and build the case against Yekatom, saying “justice would not be possible” without them. He acknowledged the sufferings of the victims and their families, saying the court would hold the former militia commander responsible.

“We cannot undo the suffering that has been inflicted on victims, but we remain committed to doing our part… to advance justice and accountability in the Central African Republic,” Bensouda said.

Drissa Traore, a vice president of the International Federation for Human Rights said the move “confirms the authorities’ commitment to cooperate with the ICC when they are unable to pursue those most responsible for war crimes.”

Sectarian violence has been a main feature of that chaos.

The government of President Faustin-Archange Touadera, which gained power in March 2016, has managed to contain the violence and restore peace in the former French colony.