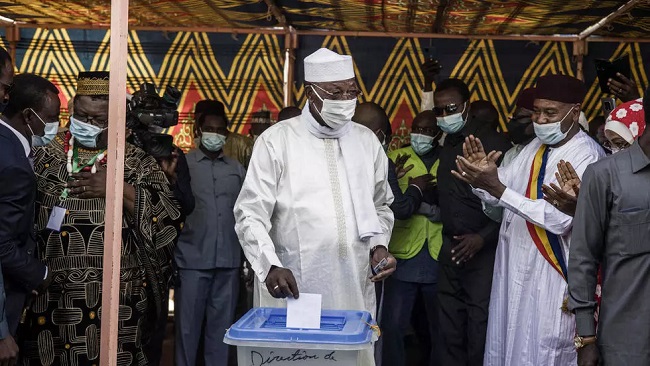 Chad: Expect things to get messy as rebels vow to keep fighting 0

The rebels that launched the offensive against the Idris Deby regime have rejected the transition government led by one of Deby’s sons, four Star General Mahamat Idriss Déby Itno and have vowed to pursue the offensive.

“We categorically reject the transition,” said Kingabe Ogouzeimi de Tapol, spokesman for the Front for Change and Concord in Chad (FACT) on Tuesday. “We intend to pursue the offensive.”

A state funeral for Deby will be held on Friday, the presidency said.

The stunning announcement about the president’s death came just hours after electoral officials had declared Deby, 68, the winner of the April 11 presidential election, paving the way for him to stay in power for six more years.

Deby “has just breathed his last defending the sovereign nation on the battlefield” over the weekend, army spokesman General Azem Bermandoa Agouna said in a statement read out on state television.

The army said a military council led by the late president’s 37-year-old son Mahamat Idriss Deby Itno, a four-star general, would replace him.

Deby’s campaign said on Monday that he was headed to the frontlines to join troops battling “terrorists”.

Four Star General Mahamat Idriss Déby Itno, 37, son of the slain Chadian President Idriss Déby, will replace his father as head of a military council, the army announced on April 20, 2021.

The circumstances of Deby’s death could not immediately be independently confirmed due to the remote location. It was not known why the president would have visited the area or participated in ongoing clashes with the rebels who opposed his rule.

Rebels based across the northern frontier in Libya attacked a border post on election day and then advanced hundreds of kilometres south across the desert.

France on Tuesday paid tribute to Deby as a “courageous friend” and “great soldier”, while urging stability and a peaceful transition in the African country after his shock death.

“Chad is losing a great soldier and a president who has worked tirelessly for the security of the country and the stability of the region for three decades,” the office of President Emmanuel Macron said in statement, hailing Deby as a “courageous friend” of France.

The statement also emphasised France’s insistence on the “stability and territorial integrity” of Chad as it faces a push by rebel forces towards its capital, N’Djamena.

One of Africa’s longest-serving leaders

Deby came to power in a rebellion in 1990 and is one of Africa’s longest-serving leaders.

Although ruling Chad with an iron fist, he was a key ally in the West’s anti-jihadist campaign in the troubled Sahel region.

On Monday, the army had claimed a “great victory” in its battle against the rebels from neighbouring Libya, saying it had killed 300 fighters, with the loss of five soldiers in its own ranks during eight days of combat.

Deby was a herder’s son from the Zaghawa ethnic group who took the classic path to power through the army, and relished the military culture.

His latest election victory – with almost 80 percent of the vote – had never been in doubt, with a divided opposition, boycott calls, and a campaign in which demonstrations were banned or dispersed.

Deby had campaigned on a promise of bringing peace and security to the region, but his pledges were undermined by the rebel incursion.

The government had sought Monday to assure concerned residents that the offensive was over.

There had been panic in some areas of N’Djamena on Monday after tanks were deployed along the city’s main roads, an AFP journalist reported.

The tanks were later withdrawn apart from a perimeter around the president’s office, which is under heavy security during normal times.

“The establishment of a security deployment in certain areas of the capital seems to have been misunderstood,” government spokesman Cherif Mahamat Zene had said on Twitter on Monday.

“There is no particular threat to fear.”

However, the US embassy in N’Djamena had on Saturday ordered non-essential personnel to leave the country, warning of possible violence in the capital. Britain also urged its nationals to leave.

France’s embassy said in an advisory to its nationals in Chad that the deployment was a precaution and there was no specific threat to the capital.

‘After Deby, the flood’

‘Expect things to get messy’

Douglas Yates, a professor in African Studies at the American Graduate School in Paris, told FRANCE 24 that Deby’s death had come as a total surprise.

“Two days ago news had come out from the US embassy that they were evacuating personnel because there were rebels marching on the capital, and frankly the thought was ‘(Deby) will defeat them’, because he has systematically defeated every attempted coup before now.”

Yates said that although Deby was hardly known to be a great democrat, “he was a real soldier and in some ways, this was a worthy death for him. To die involved in the battle was better for him I think than to die in his bed from Covid.”

The professor said much of Chad’s unrest stems from Deby’s own people in the east with discontent rising over Deby not distributing enough oil wealth to them.

“Frankly, there’s probably not enough oil wealth to go around to everyone, but basically there were people who were unhappy, who felt like they were not getting their share and that’s been a repeated pattern in attempted coups.”

On the issue of Deby’s replacement, Yates said: “Expect things to get messy during the transition.”

“He had been in power so long, and eliminating any rivals and imprisoning his democratic opposition. What you have [now] is a large number of people who would like to be the president of Chad rather than one unified opposition leader.”

“Like Napoleon had said: ‘After me, the flood.’ And certainly after Idriss Deby, the flood.”

“One thing is certain, France has just lost one of its key allies in the region.”