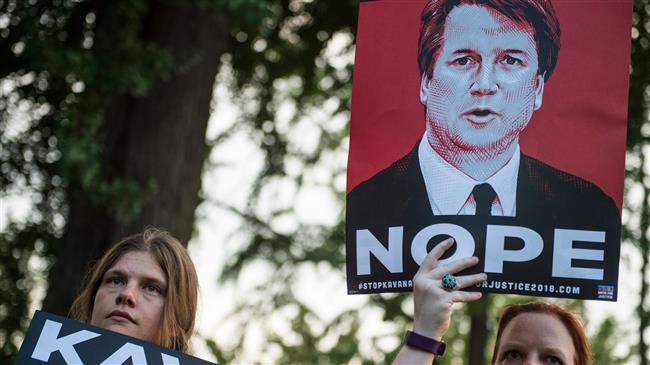 The US Senate confirmation hearing for Brett Kavanaugh, President Donald Trump’s Supreme Court pick, has turned into utter chaos as angry protests erupted and Democrats criticized Republicans for withholding documents about Kavanaugh’s past service at the White House.

It took the nominee over seven hours to be able to deliver his opening statement during the Senate Judiciary Committee hearing on Tuesday as shouting protesters were arrested in droves.

According to US Capitol police, 61 protesters were removed from the room and charged with disorderly conduct, along with nine more outside the hearing. The protesters, mostly women, were shouting slogans like “This is a travesty of justice”, “Our democracy is broken” and “Vote no on Kavanaugh.”

Meanwhile, Democratic senators repeatedly interrupted the committee’s Republican chairman Chuck Grassley at the outset of the hearing, quickly turning the session into a ruckus.

They condemned the withholding of the documents and tried to have the proceedings adjourned, as Grassley struggled to maintain order.

“We cannot possibly move forward. We have not had an opportunity to have a meaningful hearing,” Democratic Senator Kamala Harris said.

“This is the first confirmation for a Supreme Court justice I’ve seen, basically, according to mob rule,” Republican Senator John Cornyn said, a characterization Democrats rejected.

In response, Democratic Senator Dick Durbin said, “What we’ve heard is the noise of democracy.”

Grassley described the Democrats’ request to halt the hearing “out of order,” accusing them of obstruction.

Republicans, who hold a slim Senate majority, can confirm 53-year-old Kavanaugh if they stay united. There were no signs of Republican defections.

If confirmed, Kavanaugh is expected to move the court, with an already conservative majority, further to the right. Senate Democratic leaders, however, have pledged a fierce fight to try to block his confirmation.

On Twitter, Trump reacted angrily, saying the hearing was “truly a display of how mean, angry and despicable the other side is.”

He accused Democrats of “looking to inflict pain and embarrassment” on Kavanaugh.