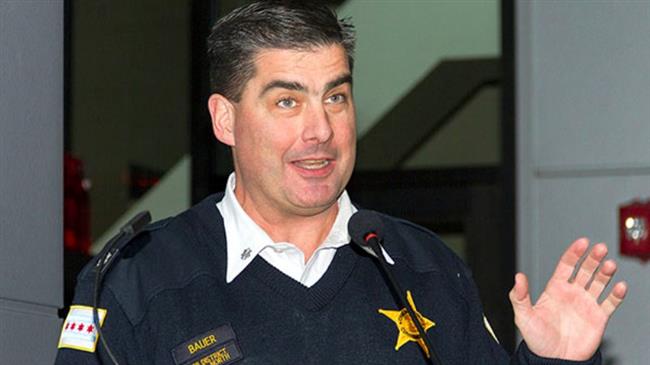 A high-ranking police official has been fatally shot while responding to a call in downtown Chicago, authorities say, marking the fifth officer who has been shot and killed across America in a little over a week-span.

Commander Paul Bauer, 53, was shot on Tuesday at the Thompson Center after chasing a man, who had fled following an altercation with other officers.

The 31-year department veteran had been in the area after attending “active shooter” training, which prepares officers for mass shootings.

At first, police Superintendent Eddie Johnson had said Bauer was off-duty when he responded to a radio call by tactical officers, who were patrolling a nearby area.

However, Officer Anthony Guglielmi, a spokesman for Chicago Police, said in a tweet early Wednesday that he was on duty.

“CPD Commander Paul Bauer was on duty when he was murdered this afternoon,” Guglielmi said. “Initial reports from the scene of him being off duty were incorrect and updated.”

“The idea that Paul would act so unselfishly and would sacrifice his own safety for the safety of the people of Chicago and his fellow officers comes as no surprise to those of us who knew him,” the statement read.

Bauer is the highest-ranking officer killed in decades and the first officer in Chicago shot and killed since the 2011 killing of Officer Clifton Lewis.

The suspect, a four-time felon and former prison inmate, aged 44, had an arrest record dating to at least 1994.

Gang and gun violence  has been a big problem in the city, although the Chicago Police Department is the third-largest in the country with more than 12,000 employees.

According to the US Centers for Disease Control and Prevention (CDC), firearms are the cause of death for more than 33,000 people in the United States every year, a number that includes accidental discharge, murder, and suicides.