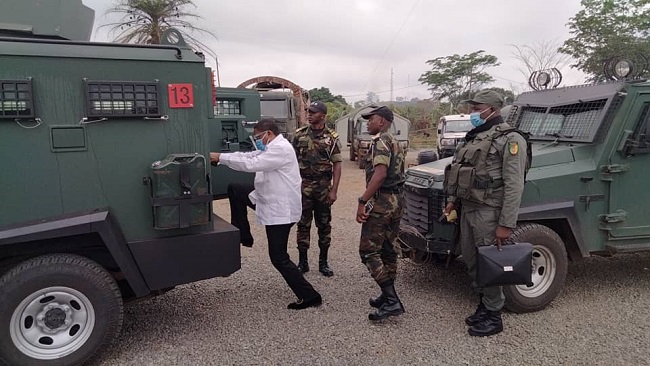 A tyrant is a cruel leader who is unrestrained by law. Tyrants often use oppressive means against their people and others to achieve their objectives. Following the deaths of Nfon Victor Mukete and Hon. Emilia Lifaka Monjowa, a tyrant has reared its ugly head in the Manyu CPDM political space-he is Victor Mengot the Minister of Special Duties at the Presidency.

Mr. Victor Mengot Arrey Nkongho (to use his four names) has creatively imposed financial obligations on all Manyu folks who are either employed or contract their services to the ruling CPDM.

Minister Victor Mengot is no stranger to controversy. He has made a career of always being associated with calamity, dishonesty, and criminality. His meteoric rise to the top echelon of the CPDM crime syndicate tells it all. Since the death of Nfon Victor Mukete, he has taken his illicit tendency and nuisance level to overdrive by opening a WhatsApp forum to harass poor Manyu men and women into paying for the funeral of a man whose family does not need the money.

Victor Mengot as the moderator of the Manyu CPDM Chat Forum he created wrote, “After a close review of the above list it is evident that quite a number of our sons and daughters of Manyu, Comrades of our great Party the CPDM whose names don’t figure either negligence or unawareness. Quite a number of us have just recently been honoured by the establishment with political cum professional promotions and we need to take this opportunity to make ourselves known and amends. Dear Comrades if you know a brother or sister, who should be on the Manyu Fora and is not, then give them a helping hand and in-box the Administrator. Thanks for your understanding” Victor Mengot

Nfon Victor Mukete, Paramount Ruler of the Bafaws, is a man with exceedingly vast financial resources. Therefore, the idea that people who are struggling to put food on the table should contribute towards his funeral is preposterous nonsense. But Manyu politics under Victor Mengot has been consistently inconsistent!! To be sure, he is always making the same errors or falling into spectacular new ones! To Minister Mengot, politics is a game for self-aggrandizement and primitive material acquisition, not an opportunity to deliver best practice and leave a rich legacy.

As we reported earlier, cat calls have greeted Minister Victor Mengot’s diabolic harsh ploy with many Manyu CPDM barons already at daggers-drawn positions.  In a recent meeting, many wondered aloud if Victor Mengot Arrey Nkongho is now the Minister for Wakes and Fund-Drives. What is even more disturbing is the kind of silence of the lamb that he (Mengot) maintained when Chief Tabetarh the traditional ruler of his native Mbinjong died. Mengot issued a poorly worded statement which was ignored by the Tabetarh family.

Senior Manyu political elites are mistrustful of the motives behind this Mukete fund-drive and one of them (names withheld) was heard murmuring privately that Minister Mengot intends to use the Mukete Fund Drive to reconstruct his house in Mbinjong that was destroyed in 2018 by Southern Cameroons pro-independence forces after he blatantly refused to comply with directives from Ambazonian Revenue Officers.

A cross section of the so-called Yaoundé Manyu CPDM militants and elites consider the Victor Mengot Chief Mukete Fund Drive unwise and unacceptable and many in the nation’s capital are in shock with Minister Mengot’s astonishingly low sense of judgment.

On his Chart forum, Minister Mengot again wrote, “Good morning Comrades. Today is Friday May 07, and the deadline for closing of this condolence list is Sunday 09 May, 2021. We know that times are hard and do complement those who have so far honoured their Division. Going through the list of those who have already responded to the appeal, it is evident that many a top Manyu political elite: National as well as Regional Parliamentarians, Director Generals, Technical Advisers, Directors, Deans of faculties and other Heads of institutions, Sub directors, Chiefs of Service, Mayors, Principals, are yet to make the gesture or have simply decided to chip in much less than is expected of them. Victor Mengot.”

Mr. Jerry Akomara, son of Late Chief Akomara of Kendem, donated CFA 25,000 FRS as the Kendem Diaspora aggressively solicits funds to bury his father. It was rumored in Yaoundé that his father’s remains were delayed before given a place in the mortuary for lack of financial resources. Somehow, he has managed to find money to pay for the funeral of Chief Mukete. Unfortunately, his donation has now shattered the hard work of the Kendem Diaspora, and he will now pay dearly for this lack of sound judgment.

Chief Micheal Oruh of Mkpot, a fugitive wanted by the Ambazonian Justice system for multiple crimes including murder and land-grabbing, paid CFA 30,000 FRS for the funeral of Chief Mukete.  The list includes donors who rely on handouts from their children or relations abroad but have complied for fear of being branded disloyal to the CPDM.

Recently, Victor Mengot opined that, “as the curtain gradually draws to the close of our financial efforts may I avail myself of this singular opportunity to congratulate the Eighty something Comrades who have so far stood up for Manyu Division. We are well over 5 Million Francs CFA and counting. There has never been any doubt of our strength in unity. To God be the glory as we seek to spread compassion within our community. Stay blessed and safe from the pandemic.”

Minister Mengot’s conduct has been shameful, disgusting and disgraceful! Never has Manyu been so disappointingly represented at the French Cameroun national level of politics. The days of political titans in the magnitude of SA George, SE Ncha, Hon WNO Effiom, Sessekou Enow Tanjong, Chief ET Egbe, and Michael Tabong Kima are indeed over. Today, the political bar in La Republique du Cameroun is so low that Manyu suffers the ignominy of being represented by a show Boy they call Victor Mengot.

However, considering the fact that the Whiteman who invented the airplane has until today not been able to create a garage for its repairs up in the air! It is a truism that everything that goes up must come down. No political life goes on forever. If it did, Chief Inoni Ephraim, Edgar Alain Mebe Ngo’o, Marafa Hamidou Yaya, Professor Gervais Mendo Ze, and many would still be parading the imposing CPDM corridors of power.

Victor Mengot must know that political life in the CPDM is perilous, and a wise political operator builds bridges with his people. But, as his style is arrogance, his fall will be greater than Humpty Dumpty. In Arrow of God, Chinua Achebe stated that no man, however great, can win judgment against his people and even if you win, your people would say you betrayed them. That is why we of the Concord Group think that the Manyu Mukete Fund Drive may as well be Victor Mengot’s last journey of many dangers.