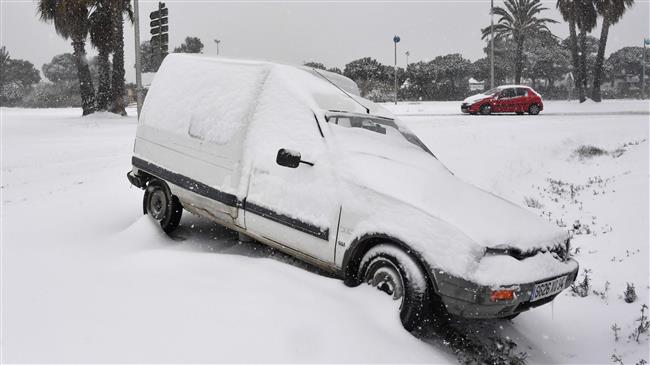 An extreme cold snap across Europe claimed more lives, forced the closure of airports in Scotland, Switzerland, France, and Ireland, and left hundreds of drivers stranded on snowy highways Thursday.

Heavy snow and high winds halted all flights in and out of Dublin Airport, with authorities saying they are unlikely to resume until Saturday. Irish Rail said no trains are likely to run until Saturday.

Irish Prime Minister Leo Varadkar urged people to get home by 4 pm Thursday and stay there until the storm has passed. The Irish stock exchange shut down at midday and will be closed all day Friday.

“The risk to life and limb presented by severe weather conditions should not be underestimated,” said Varadkar.

The World Health Organization warned Thursday that the cold weather poses particular risks to vulnerable people such as the elderly, children, and those with chronic diseases or disabilities.

Swedish media reported that a woman who had left her home at an asylum center with her daughter and son, aged 8 and 9, was pronounced dead in the hospital after being found in a forest.

Danish police said an 84-year-old woman with dementia became the second person to die in the country because of the cold weather.

It was travel chaos at Europe’s airports and on its highways.

Geneva’s airport closed after the Swiss city was hit with 13 centimeters of snow over a three-hour period early Thursday. It reopened several hours later after extensive de-icing of the runway, plans and facilities.

Snow also shut down Glasgow and Edinburgh airports in Scotland, and there were cancellations at Heathrow and other airports in Britain. Airports in the southern French cities of Montpellier and the Atlantic beach resort of Biarritz were also affected.

Around the Paris region, about two dozen officials braved Arctic temperatures for a night outdoors to call attention to the plight of the homeless after at least 13 died from exposure since January 1.

Hundreds of drivers were trapped in their cars overnight in Scotland, and authorities said everyone except emergency workers should stay off the roads.

Police in the county of Lincolnshire in eastern England said most roads there are impassable, with as much as 60 centimeters of snow in rural areas.

In southern France, about 2,000 cars were blocked on highways in the Herault region, where snow — and snowplows — are extremely rare.

Macedonia’s government urged employers to exempt pregnant women and people over 60 from working for a day and to pay special attention to keeping construction workers warm due to the freezing conditions. The low temperature Thursday in Macedonia dropped to -18 Celsius near the border with Bulgaria.