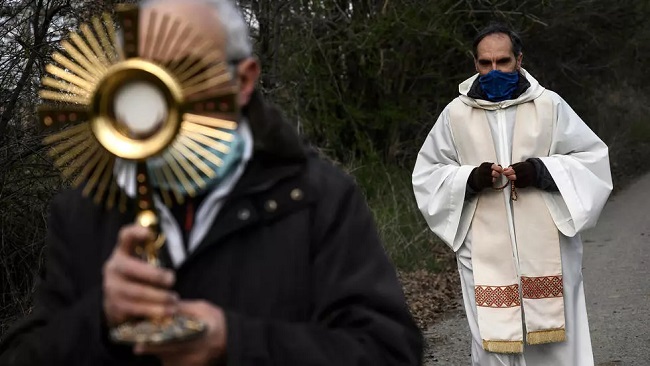 They preside over funerals, comfort the sick, and are often themselves elderly: in the coronavirus crisis in Italy, priests are paying a heavy price.

“A priest is always close to the people. For good or bad, it’s his raison d’etre,” said Monsignor Giulio Dellavite, secretary-general of the diocese of Bergamo, which is currently the hardest hit area in Italy’s north.

Over 7,000 people have been infected by COVID-19 in the city and province of Bergamo, and priests have not been spared.

Of the 67 Italian priests who have died of the virus, more than 20 have come from Bergamo, including a bishop, according to the Catholic newspaper Avvenire.

However, the grim toll does not deter many.

Giuseppe Locatelli, the priest of the parish in Albino, also in the province of Bergamo, says he has no plans to renounce his ministry.

“Priests are on the second line. Doctors and nurses are on the front line with the risks they take every day. We take fewer risks,” Locatelli told AFP.

He recently blessed a man on his death bed, he said, “because it was a special circumstance,” with only the ailing man’s wife and handicapped son at home.

“They were alone,” Locatelli said.

Like doctors and nurses, priests need to protect themselves, Dellavite said.

“Our priests are dying because they’re not calculating” the risks, he said.

One of them was Giuseppe Berardelli, a priest from Casnigo, near Bergamo, who died in hospital this month at the age of 72.

“Not knowing that the virus was so dangerous, he continued to work, going into homes to perform funeral rites. And when he got infected, he didn’t stop right away,” said Gianbattista Guarini, a local merchant in Casnigo.