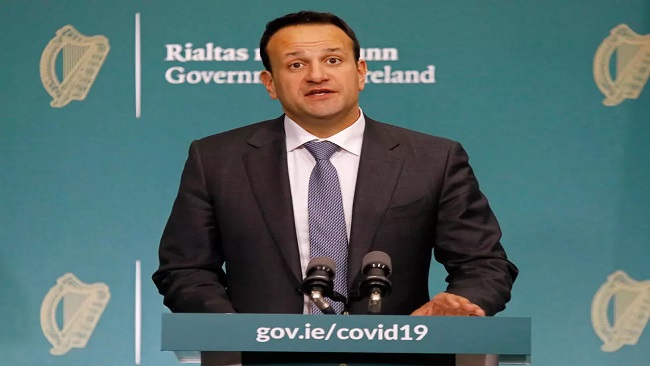 Ireland will begin to lift its coronavirus lockdown in the coming days while introducing a 14-day quarantine period for people arriving in the nation, Prime Minister Leo Varadkar said Friday.

“I can confirm that it is safe to proceed with phase one of our plan to ease the COVID-19 restrictions from Monday,” he said, indicating the start of a five-stage plan to reopen the country set to stretch until August.

The changes coming into effect after the weekend will see staff return to outdoor workplaces and the reopening of some shops, sports facilities and public amenities such as beaches.

Citizens will also be allowed to meet in small groups outdoors.

Social distancing measures are to remain in widespread use as they have been since Ireland’s lockdown began on 28 March.

Meanwhile, the Irish cabinet agreed to make it mandatory for arrivals to fill out forms outlining where they will quarantine.

“We’re going to examine means by which it can be enforced thereafter,” Varadkar said at a Dublin press conference.

Travellers from the British province of Northern Ireland will be exempt.

The government also issued advice for “face coverings” to be worn in enclosed public spaces such as shops and public transport.

“Coronavirus is an inferno that is raging around the world”, said Varadkar.

“In Ireland it is now a fire in retreat but it’s not defeated — we must extinguish every spark and quench every ember.”

Effects of the relaxation will be monitored for three weeks before the government decides whether to move to the next stage in the “roadmap” to reopen the nation announced earlier this month.

Ireland has suffered 1,506 deaths from COVID-19, according to health department figures.

Reported daily deaths peaked at 77 on 20 April, but on Thursday had fallen to just 10.

Chief medical officer Tony Holohan said in mid-April that the nation had successfully quashed the spread of infection.

But, as in other countries, there is fear of a second wave.

“We have to remember that just as our actions brought about the progress you’ve seen to date, our actions could also set us back,” Health Minister Simon Harris said.

If the first phase of relaxations is deemed successful, the second stage will allow wider travel, visits to other households and employees to return to work under social distancing measures.