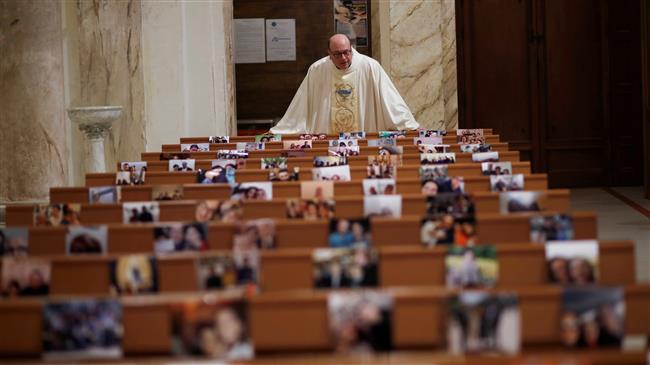 At least 1,844,410 people are diagnosed with COVID-19 across the globe, and 114,090 others have so far died of the disease, according to the latest data collected by Johns Hopkins University.

Slowing death rates from the coronavirus epidemic in Italy, France and Spain — the worst-affected nations after the United States — have provided some hope in Europe, where millions of people celebrated Easter Sunday under lockdown in their homes.

Here are the world’s key developments related to the pandemic over the past 24 hours:

Deaths from coronavirus infection in Italy rose by 431 on Sunday, down from 619 the day before, official said. That was the lowest daily rise in deaths since March 19.

The overall number of fatalities was reported at nearly 17,500.

The country started loosening the lockdown and reopened parts of its economy with construction and manufacturing workers returning after a two-week period.

France has reported a drop in fatalities from COVID-19 over the past 24 hours, with 315 deaths in hospitals on Sunday, compared with 345 the day before.

President Emmanuel Macron is expected to address the nation for a third time over the outbreak later on Monday. Official said he is due to stress the need for the lockdown to continue.

The total death toll, which includes data from hospitals and nursing homes, reached 14,393 in the country, with a total 132,591 infections as of Sunday.

The figure brought the country’s overall tally to 18,328.

According to Russia’s coronavirus crisis response center, 18 patients also died of complications from the viral infection, bringing the country’s overall death toll to 148.

Meanwhile, police have tightened a lockdown in the capital, Moscow, where more than 10,000 people are infected with the virus.

Traffic police have set up checkpoints on major thoroughfares on the outskirts of the city to control traffic.

China recorded 108 new cases of the disease on Sunday, marking the highest number of cases in more than five weeks.

The National Health Commission said 98 cases had been travelers from abroad.

Recent increases in the number of imported cases have sparked fears of a second wave of infections in the mainland. As part of the latest restrictions in the country, cities near the border with Russia are tightening border controls and imposing stricter quarantine after officials reported an influx of infected cases from Russia. The northeast Heilongjiang Province, which borders Russia, has become the new battleground against the coronavirus outbreak.

South Korea said on Monday that at least 116 people who had recovered from COVID-19 had tested positive again.

While the country reported 25 first-time infections on Monday, the number of “reactivated” patients had more than doubled since a week earlier, when officials started reported such cases.

South Korea health officials are investigating the cause of the apparent relapses. The World Health Organization (WHO) has also opened an investigation into the cases.

In the Middle East, Jordan extended its month-long lockdown until the end of this month on Sunday.

The country has reported 389 confirmed cases of COVID-19 and seven deaths.

Jordan had declared a 24-hour nationwide curfew on March 20.

Turkish President Recep Tayyip Erdogan has rejected the resignation of his interior minister, Suleyman Soylu, who had hastily declared a weekend lockdown that led to a surge in panic buying and traffic in Istanbul.

Soylu announced his resignation in a Twitter message on Sunday, saying he was responsible for implementing the lockdown.

Erdogan, however, refused to accept his resignation. Health officials reported 97 more deaths on Sunday, bringing the death toll to 1,198. The country of 80 million has nearly 57,000 confirmed cases of the viral infection.

A former Israeli chief rabbi died of complications caused by the new coronavirus on Sunday.

Eliyahu Bakshi-Doron, 79, who had served as Israel’s top chaplain for Sephardim from 1993 to 2003, died of COVID-19 in a hospital in Jerusalem al-Quds.

In Africa, Sudan was set to introduce emergency laws, including banning all passenger road transport between cities, as part of measures to prevent the spread of the coronavirus.

It has registered 19 cases and two deaths.

In Mexico, the Health Ministry reported 442 new cases of infection and 23 more deaths on Sunday.