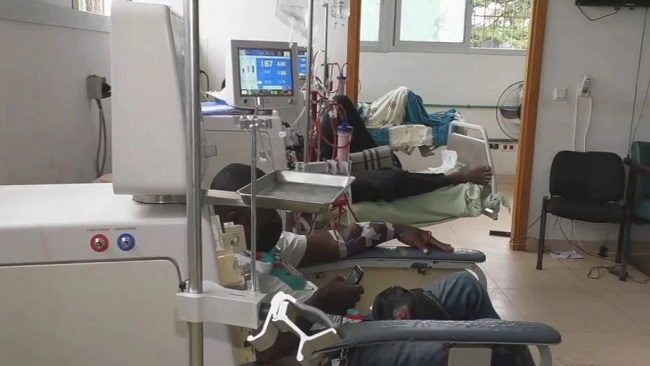 Scores of Cameroonians with kidney failure and their relatives have blocked traffic since Monday around a Yaoundé hospital to protest a shortage of dialysis treatment.  Cameroon authorities blame administrative procedures and coronavirus disruptions for slowing the import of dialysis machines and medicines.

Traffic was at a standstill in Yaounde’s Melen neighborhood this week as hundreds of patients with kidney failure, and their relatives, protested a halt to treatment at the Yaoundé University Teaching Hospital.

Among the kidney patients who sat or lay on the road in front of the hospital is 54-year-old Emmanuel Pierre Essi.

He says their protest began on Monday after at least seven kidney patients died within three weeks due to lack of treatment.

Essi says he and many of his peers may die after missing at least six sessions of hemodialysis for the past two weeks.  He says the Yaoundé University Teaching Hospital has only five hemodialysis machines for over 160 patients.  Essi says old age and overuse have crumbled the machines and patients who need four hours of dialysis per session, now take seven hours to filter and purify their blood in the dialysis machine.  He says kidney patients also lack hemodialysis kits and dialysis fluid.

Cameroonian health officials are pleading with the patients to halt their protest while the government tries to fix the problems.

The government says that since the coronavirus pandemic began last year, it has been unable to import dialysis equipment and medicine from suppliers abroad due to travel restrictions and the economic slowdown.

He says Cameroon and its suppliers in Europe and China are examining the best possible ways to speed the shipment of dialysis kits and dialysis machine spare parts to Cameroon.  Ntone says the government has agreed to urgently release funds for the purchase of hemodialysis kits.

Ntone says kidney patients who become critical will be transferred to other dialysis centers.

He says hospitals are negotiating with the government to allow the buying of medicines and equipment without passing through a long procurement process.

Meanwhile, on the third day of the demonstration, some of the protesters are refusing to back down.

“We cannot be indifferent while our relatives are dying,” he said.  “We want the government to look for a way of importing equipment instead of always complaining that the coronavirus has [imposed] restrictions to the shipment of goods from Europe.  They should not forget kidney patients while struggling to stop corona.”

Cameroonian health authorities say the country has about 2,500 patients with acute kidney infections, up from 400 in 2012.

There are about seven towns in Cameroon with dialysis centers, with five dialysis machines at each.

Yaoundé has two such centers — the largest with 20 dialysis machines.  But health authorities acknowledge they are often not working as a result of overuse and poor power supply.