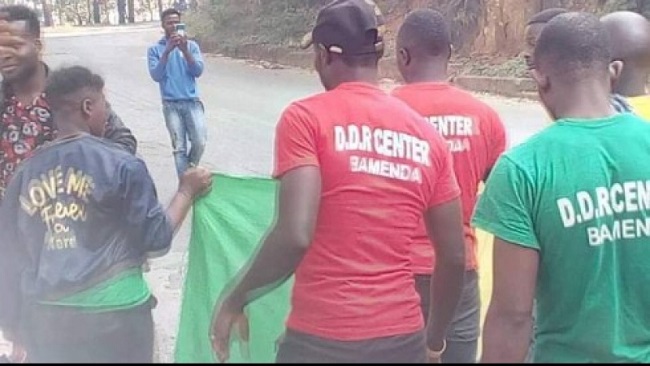 At the behest of the Prime Minister, Head of Government, a delegation left Yaoundé to appease disgruntled repentant separatist fighters lodged at the National Disarmament, Demobilization and Reintegration, NDDR, Centre in Bamenda.

The Prime Minister’s envoy, Gillette Nkwain Ngam touched down on Bamenda Wednesday, February 17, 2021, accompanied by representatives of other ministerial departments.

The team was the bearer of a FCFA 4 million financial package for the ex-fighters. FCFA 3 million was handed to the ex-fighters to cater for their welfare while FCFA 1 million was given to the Director of DDR Bamenda, Sixtus Gabsa for the establishment of identification cards for the former Ambazonia fighters.

When the ex-combatants marched to the office of the North West Regional Governor on Monday, February 15, 2021, it was to remind the government of its “unfulfilled promises”.

“Amba must obey government…if you want to kill me, go ahead. But I will never run away from this country,” the ex-fighters sang waving the Cameroon flag as they marched up to the Governor’s office.

The former fighters told Governor Lele Lafrique Tchoffo Deben Adolphe that the government is yet to fulfill some of the enticing promises that made them drop their weapons.

Aside from asking the government to improve their living conditions, the protesters requested that they be given identification cards.

They also asked the government to put them on an allowance that can enable them to meet up with some of their daily needs.

“We also want the government to put out a clear calendar for those who have been disarmed. We need to know how long we have to stay in the DDR center before we can be reintegrated into society. Some of us have been here for too long,” one of the ex-fighters is quoted as saying.

Governor Lele Lafrique Tchoffo Deben Adolphe asked the protesters to put their demands in writing. He promised to visit them at their center on Wednesday.

After a brief meeting with the Governor and a working session with the ex-fighters, the team from Yaoundé gave assurances that plans are being finalized to reintegrate some of the disarmed fighters and make life at the disarmament centers more beautiful.

The government says upon their reintegration into society, the ex-fighters will not only have jobs, but they will also be job creators.

The ex-combatants handed over a written document containing their demands to the Governor who in turn handed it to the Yaounde delegation for the appreciation of hierarchy.