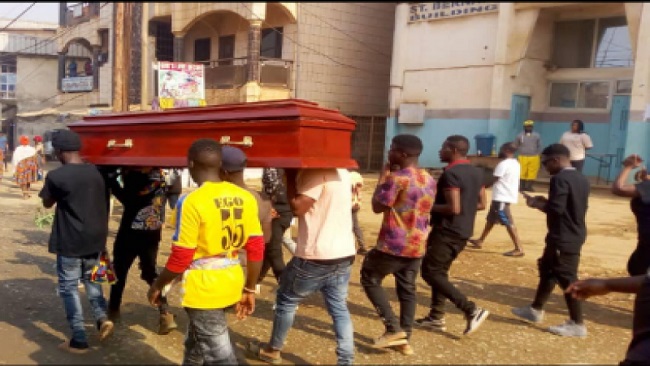 In a press release Wednesday, January 27, 2021, Atonfack said elements of the 5th Gendarmerie Region carried out Saturday’s killings at Meta Quarters in Bamenda.

“The Ministry of Defence hereby informs: in the afternoon of Saturday 23 January 2021 at about 2:00 pm, and following some information received from the population, elements of the 5th Gendarmerie Region carried out a preventive control operation in the Meta Quarter neighbourhood in Bamenda II subdivision, Mezam Division of the North West Region,”  Atonfack wrote.

“The objective of this operation was to capture a group of terrorists gathered in an abandoned building on the orders of the nicknamed ‘General Tiger’ who were planning an assault on the T-Junction Police Post,” the military spokesperson furthered. “As military vehicles approached, these armed individuals who were busy consuming hard drugs were taken by surprise, and immediately opened fire on the elements of the Defence Forces, who provided an energetic and appropriate response.”

Atonfack said, “The confrontation led to 04 terrorists neutralized, several others injured and on the run, while tens of M21 S and FAL type weapons were retrieved. Investigations carried out by local authorities reveal that the abandoned building which was the epicenter of the skirmish was regularly used by the terrorist group as a confinement centre for kidnapped persons before their transfer to fortified camps located in the forest.”

Locals say those killed were not separatist fighters

On Tuesday, the mortal remains of 18-year-old Fon Blaise, one of the four teenagers killed by security forces in Meta Quarter, was paraded along the streets of Bamenda. The young people bearing the casket said their peers killed had nothing to do with the separatist movement.

Fon Blaise who lived in Meta Quarter was killed along with Ngalim Alucious, Ntakah Nelly Mbah, and Sale Sadam from Old Town in Saturday’s raid. Local reports however confirm that the quartet was smoking weed in an abandoned building usually used by armed separatist fighters.

Informed of the presence of separatist fighters in the said building, soldiers reportedly arrived when the outlaws had fled leaving behind the four killed.

“However, the armed fighters, two in number as reported by eyewitnesses in the vicinity seemed to have been tipped of the coming of the military into Meta Quarter. As they were running away from the abandoned building, they fired two shots into the air, confirming their presence in the area. It would appear the military received the gunshots as a red light and decided to fire at whoever was in the building or around it,” journalists Sah Terence reported.

“A popular petrol seller who goes by the name Tanyi and keeps his fuel somewhere in the abandoned house was almost shot by the military as he went on his knees with hands up shouting in French “je suis venu pour prendre mon petrol” he was searched and noticed to be telling the truth and asked to get away.”

Soldiers however shot and killed those who were met smoking weed in the abandoned building. Although locals say those killed were civilians, the military maintains they were armed separatists.