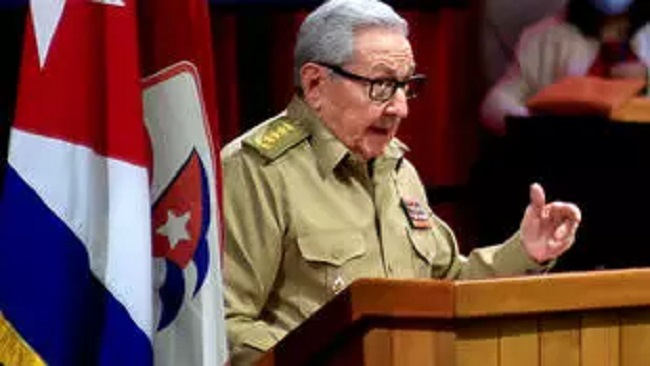 Former Cuban President Raul Castro has announced his resignation as the head of the country’s ruling Communist Party, the most powerful position in the Caribbean island nation.

Castro made the announcement during a speech Friday on the first day of the party’s eighth congress, saying he is handing over power to a younger generation that is “full of passion and anti-imperialist spirit.”

“I believe fervently in the strength and exemplary nature and comprehension of my compatriots, and as long as I live, I will be ready with my foot in the stirrups to defend the fatherland, the revolution and socialism,” he told party delegates at the closed-door meeting at a convention center in Havana.

Castro underlined that he was retiring with the sense of having “fulfilled his mission and confident in the future of the fatherland.”

He is expected to formally step down on April 19, the last day of the congress, when the party’s new leadership will be elected.

The 89-year-old was elected to the top position in 2011, succeeding his older brother and ex-president Fidel Castro, who had held that position since the founding of Cuba’s Communist Party in 1965.

Raul Castro announced in 2018 that he expected incumbent President Miguel Diaz-Canel to replace him after his retirement in 2021. The 60-year-old represents a new generation and has been serving the first of two five-year terms as president.

Castro’s retirement comes as Cuba is facing multiple challenges exacerbated by US-led sanctions against the Caribbean island nation as well as the coronavirus pandemic.

Cuba’s economy shrank 11 percent last year due to the deadly viral pathogen and tightened US sanctions which have caused a decline in aid from its ally, Venezuela.

The then US secretary of state, Mike Pompeo, said Cuba was being blacklisted for “repeatedly providing support for acts of international terrorism,” and cited Cuba’s security support for Venezuelan President Nicolas Maduro.