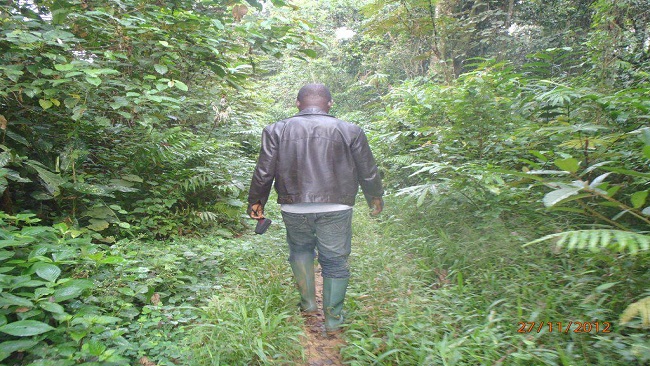 Did I See An Amba Boy Going To Be Executed? A Franklin Sone Bayen war report 0

I believe I saw Michael Akachi walk to his death. He was escorted to the “stake” by two armed soldiers of the Rapid Intervention Brigade (BIR). He just could not see his sympathizers or mourners watching, bemused at his final walk; he was blindfolded with a red piece of cloth. Neither could he give them a goodbye wave, though obviously hearing their voices and movements around; his hands were bound in front of him.

This is the story of the summary execution of a suspected combatant of the Ambazonia restoration forces or “Amba Boys” at Mabanda, just outside Kumba, along the Kumba-Mamfe road.

My multiple mission was to convey relief supplies from a humanitarian organization abroad destined for my village IDPs, which had been stuck for weeks in Douala as none of those assigned for the dispatch was ready to brave the gun battles infested Kumba-Mamfe Road.This was a few days to the dreadful countdown to September 16, initial debut date of the announced lockdown ahead of October 1 (“Amba Independence” celebration) and October 7 (presidential election), when people were fleeing the Southwest and Northwest in droves, most of them to Francophone cities for sanctuary.

I thought there was no better time to bring humanitarian supplies to our suffering people stuck in the forest.Another reason for braving the Kumba-Mamfe road was to check on village home before the lockdown, especially after reports of soldiers breaking into homes hoping to find weapons.  But above all, as a journalist, that was an opportunity to jot some notes on the unfolding drama. I jotted a few.A fraction of my fellow passengers were young women doing the reverse journey from Anglophone and Francophone cities to their villages to both support their ageing parents camping in the forest under precarious conditions, and to “enjoy” the safety of the forest at a time of uncertainty of what the city held for anyone, should the looming confrontations from the October lockdown snowball into the unknown.

Our driver began receiving advice and warnings against engaging our journey prior to our take off from Mile 17 park, Buea because, he was told, there had been skirmishes between Government forces and Amba Boys along the way. Arriving Muyuka, our driver transfered us into another bus that brought passengers from Kumba; a kind of passenger swap so that each driver engaged the stretch of road he mastered better.Just over an hour into our journey, we ran into an unusual checkpoint. Two armed men in civilian clothes, all-black, with “necklaces” and other things that looked like amulets, flagged our bus. They told us to contribute to their effort. “We di fight na for wuna” (It’s your cause we are defending), they said. They urged us to make hey and drive on fast. The formalities done, we drove on.Great was our surprise that, just around the bend, not quite 20 metres on, we were at the Mabonji “mixed control” checkpoint, the last before Kumba.”So, they operate so close to each other?” a fellow passenger wondered. “It looks like they have come to an understanding to respect each other’s space until when there is combat,” said another. It was confusing.

Traffic controls, disembarkment in Kumba and other travel hassles, by 5pm, I was taking off from the Mabanda park right across town. A couple of minutes on, we were at the Mabanda checkpoint. We went through the now usual practice of alighting before the “gate”, being checked by officers, and embarking again across the gate. Three or four other vehicles had arrived the checkpoint from both sides, so there were more than a dozen passengers crisscrossing each other or loitering around the checkpoint.Just then, I saw two BIR officers with guns, escorting a young man dressed in all-black. He was possibly taller than both of them. His eyes were bound with a piece of red cloth. His hands were apparently bound infront, handcuffed, maybe. I could not tell, watching them from behind.They led him towards a right hand branch off, a few metres from the checkpoint facing Kumba. It led to the local GHS or GBHS Mabanda. I was told the military camped there. I could read gloom on the faces of three young women by me also watching, they too waiting to board their vehicle. I guessed their guess was my guess.The driver told me he had noticed that young man sitting with soldiers under a shelter at the checkpoint when we arrived there, guessing he had been arrested and kept there for some time. It looked like they decided to take him away at that moment for the many passengers transiting at that time, to be eyewitnesses and travel with the word to serve as a deterrent to other young men.I wished for a few more minutes there to take some more mental notes, but the driver said we had to get going because he had to return before nightfall with some passengers waiting in Nguti.

A few minutes on, just before we entered Ikiliwindi, about 10km from the checkpoint, we saw dead bodies on the road, some in culverts. The driver had to wabble through them carefully.About 30 minutes later, between Konye and Supe, the village that precedes the flyover, we met another unusual all-black checkpoint. A single gunman. He was about done with a vehicle ahead of us when we arrived. When the formalities were done, he greeted me in a familiar tone. When I looked at him, surprised (or scared?), he laughed and said, “Brother, you surprise? I know you. I know you,” he said chuckling now as he walked away and we drove off.Arriving Manyemen just before nightfall, I narrated the eyesaw of my journey to my acquaintances, the few village folks who braved it to stay on in the ghostly deserted village, mainly people selling fuel along the road or food to people camping at the famous Manyemen Hospital. I described the young man I had seen being taken away by the soldiers and what I guessed was his fate. “Someone said, ” Hmmn, I hope it’s not… hmmn, because that description and the colour of the dress, that could be… hmmn!” Someone else said, “Ha! Leave that your own. Anyone can be dressed in black and black.”Next morning, Friday, September 14, a young lady walking towards me said, “Brother, hmmn, it looks like that boy you described yesterday is a boy from our village o! His sister has called that they say they have found his body somewhere around Ikiliwindi. He is the son of Mami Agie Sunday.”The next time I met her, she said another call had disproved the story. But by noon, she told me again the death had been confirmed, that a family member had identified the body and plans were afoot to bury him there. Shortly after, a few women walked with Mami Agie Sunday in tears to the roadside, support her on both sides. They sat her down in front of the hospital gate to help her to find transport for the “funeral”.

In a small group apart, people took turns to narrate Michael Akachi’s last day. He had been living or working or farming in some village in Manyu division and had not been seen Manyemen for a while. That Thursday, he stopped over in the village to give some provisions to his mother before travelling on towards Kumba. At the roadside when he pulled out his wallet to pay his fare, something that looked like an amulet fell from his pocket. Onlookers, alarmed, said they warned him that could land him into trouble with Government defence and security forces who suspect such objects as the charms they believe are used by Amba Boys. They said they believed the amulets were found on Akanti at the Mabanda checkpoint, and that might have led to his arrest and his doom.