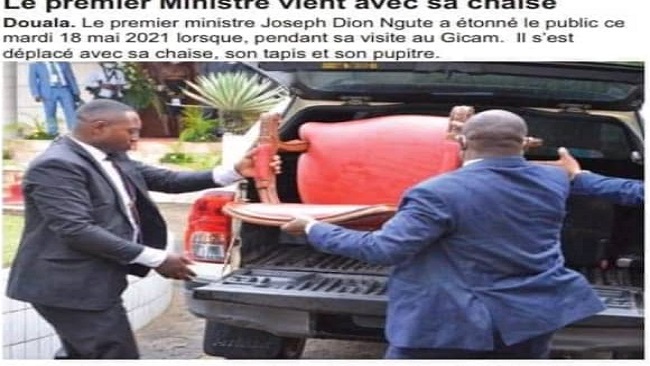 The so-called premier was in Douala with the CPDM begging bowl to meet the business community but failed to observe proper protocol. The Southern Cameroonian who moonlights as prime minister and head of government arrived Douala with his own seat, red carpet, food and drinking water.

Dion Ngute was in Douala yesterday for a number of engagements including one with the business community known as GICAM.

A senior official at the Littoral Governor’s Office told Cameroon Concord News that it was deeply regrettable that the crisis in Southern Cameroons is now tearing the ruling CPDM party apart.

In a personal attack on the Southern Cameroons pro French Cameroun political elite, a Laurent Esso aide boasted that the prime minister will soon be arrested and he will be forced to show respect for Minister Esso.

The Star Building declined to comment on the happenings in Douala.