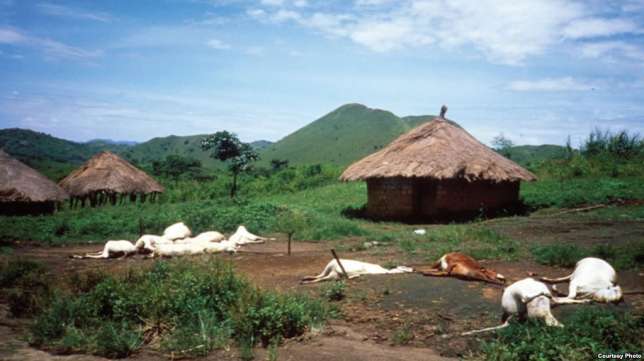 Do you know that a volcanic eruption in Southern Cameroons once killed over 1700 people? 0

On the deadly night of August 21, 1986, a strange and mysterious natural disaster took place at one of the most interesting lakes in Africa — Lake Nyos.

Lake Nyos is not an ordinary lake. It is a crater lake — a lake formed atop a volcanic crater in northwest Cameroon. Though it is one of the most unforgettable tourist attractions in Cameroon, the areas surrounding the lake are deserted as settlers were moved far away from it.

Before the 21st, Lake Nyos was a beautiful blue lake with picturesque surroundings.

What the villagers settled around it did not know was that CO2 leaks deep below the lake. On that unfateful day, the water became saturated with the gas and a frothy spray shot hundreds of feet out of the lake, and a white cloud of carbondioxide collected over the water and flowed across the land. The cloud grew to 100 meters tall and moved up to 25 kilometres away from the lake, into the villages of Cha, Nyos and Subum.

The gas cloud displaced all the air, quietly suffocating an estimated 1,746 people and 3,500 livestock.

A volcanic eruption in Cameroon once killed over 1700 people (Imgur)

This disaster lasted for two days, leaving everywhere dead silent, and by Aug. 23, most of the cloud had blown away. After being unconscious for up to 36 hours, few people revived to find, horrifically, that their family members, neighbours and livestock were dead. They found no disturbances, no violence – just corpses. Even the flies had dropped dead. The lake had even lost its signature blue hue and all that was left was a brown rust colour.

One survivor, Joseph Nkwain from Subum, described himself when he awoke after the gases had struck:

“I could not speak. I became unconscious. I could not open my mouth because then I smelled something terrible … I heard my daughter snoring in a terrible way, very abnormal … When crossing to my daughter’s bed … I collapsed and fell. I was there till nine o’clock in the (Friday) morning … until a friend of mine came and knocked at my door … I was surprised to see that my trousers were red, had some stains like honey. I saw some … starchy mess on my body. My arms had some wounds … I didn’t really know how I got these wounds … I opened the door … I wanted to speak, my breath would not come out … My daughter was already dead … I went into my daughter’s bed, thinking that she was still sleeping. I slept till it was 4:30 p.m. in the afternoon … on Friday. (Then) I managed to go over to my neighbours’ houses. They were all dead … I decided to leave … (because) most of my family was in Wum … I got my motorcycle … A friend whose father had died left with me (for) Wum … As I rode … through Nyos I didn’t see any sign of any living thing … (When I got to Wum), I was unable to walk, even to talk … my body was completely weak.”

Now, the government has put in preventive measures like the 3 degassing pumps in the lake although the settlers have still not returned. Till date, Lake Nyos and the surrounding land in northwest Cameroon still seem to be completely dead with no sign of birds or any other animals.