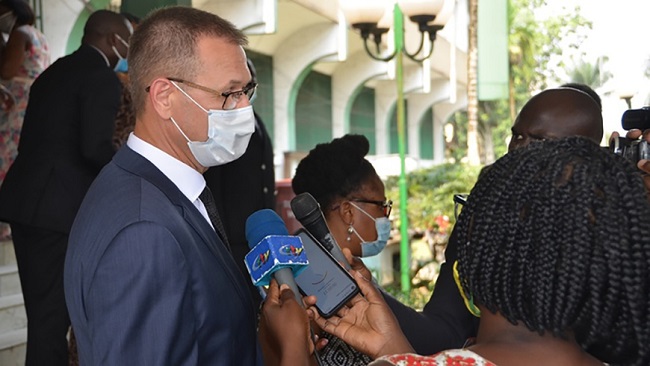 The Honorary Consulate of Belarus has opened in Cameroon. BelTA learned from the Belarusian Embassy in Nigeria.

“The official inauguration ceremony and the opening of the office of the Honorary Consul of the Republic of Belarus in the Republic of Cameroon Igor Kolesnikov took place in the city of Douala. During the ceremony Governor of Cameroon’s Littoral Region Samuel Ivaha Diboua handed over the exequatur to the Belarusian honorary consul,” the embassy informed.

The event was also attended by representatives of the Ministry of Foreign Affairs of Cameroon, the Belarusian Embassy in Nigeria, executive and judicial authorities, the business community and the media.

In addition to that, the honorary consul and the representative of the Belarusian Embassy in Nigeria met with the governor of Cameroon’s Littoral Region to discuss promising areas of cooperation between Belarus and Cameroon. The governor expressed interest in visiting Belarus to learn more about its economic potential.

Igor Kolesnikov is a citizen of the Republic of Belarus, a doctor by education. He has been living in Cameroon since 1995. He is executive director of GROUP FORM S.A.R.L, a Cameroonian company that sells and services medical equipment in Cameroon. Igor Kolesnikov also runs a private practice in Douala. He is widely known in business circles in Cameroon.